All About Addie (Ross)

. Although not as legendary, A Letter to Three Wives is every bit as good, perhaps even better. Unlike Eve, Wives hasn’t deteriorated into camp parody.

The Invisible Woman
A Letter to Three Wives is centered on three young wives (Jeanne Crain, Linda Darnell, Ann Sothern) whose roles are fairly equal and intertwined. But perhaps the most intriguing character in the movie is someone you don’t even see. 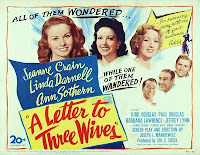 Caustic Commentary
Addie Ross, the divorced friend of all three wives informs them that she’s run off with one of their husbands. Throughout the movie, Jeanne, Linda, and Ann are consumed with anxiety about the state of their respective marriages. We don’t see Addie, but we hear her snide remarks and commentary throughout the film, making her a major character. And it’s clear that all of the husbands adore Addie and speak of her often in conversations with their wives present. 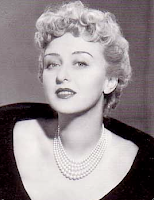 Who is the voice of Addie? None other than Academy Award winner Celeste Holm (Gentlemen’s Agreement

). Her rich and sexy voice helps create, in our minds, a woman who is at once beautiful, (so strong is her presence and the other characters’ reactions, we’re sure she’s beautiful) alluring, and mysterious. Even though Addie is a “friend” of the three wives, they all seem to envy and fear her, although they’d be hard-pressed to admit it.

From Addie to Karen

What was Holm’s reward for her voiceover work? A role in Mankiewicz’s All About Eve. And this time we actually get to see her. The role of Karen Richards, Margo Channing’s best friend, would earn Holm another Academy Award nomination. Even with the Academy Award win and two other nominations, Holm never achieved superstar status. Still, she created some memorable characterizations, including a character named Addie Ross: the woman who is heard, but never seen.

Heigh-ho!
Posted by Stephen Reginald at 8:57 AM