Preston Sturges and "The Lady Eve" 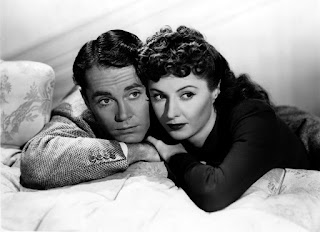 This post is part of The Criterion Blogathon hosted by Aaron at Criterion Blues, Kristina at Speakeasy and Ruth at Silver Screenings. It is one of many by some of the best movie bloggers around. I’m so glad to be a small part of this event. To check out all of the other great posts, click here.

Preston Sturges was a playwright, writer of screenplays, inventor, movie director, and a restaurateur. The Lady Eve cemented Preston Sturges’s place as one of American cinema’s major talents.

Sturges wrote the play Strictly Dishonorable in 1929. It was a major hit on Broadway for 16 months. This success caught the attention of Hollywood and Sturges began writing for Paramount. He eventually went from Paramount to Universal, MGM, and then back to Paramount where he had an amazing eight-year run as one of the very first writer/directors in Hollywood. 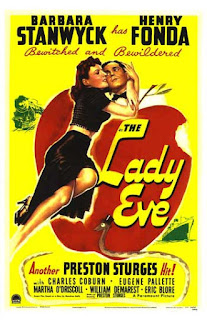 The Lady Eve (1941) centers around Father and daughter con artists, along with their “butler” (Charles Coburn, Barbara Stanwyck, and Melvin Cooper respectively) and their caper on a transatlantic cruise ship swindling rich passengers in card games. When the two spot a big fish, Charles Poncefort Pike (Henry Fonda), heir to Pike Ale—“The ale that won for Yale”—they decide to take him for all he’s worth. But when the daughter (Eve/Stanwyck) falls in love with their mark, things get complicated and hilarious.

This was Preston Sturges’s third film as both writer and director and his first big-budget production with A-list movie stars. After the critical and financial successes of The Great McGinty and Christmas in July, both released in 1940, Paramount gave Sturges free rein to craft The Lady Eve. For his leads, Sturges got Stanwyck and Fonda. From all accounts, both stars enjoyed working with each other and with Sturges. Sturges wrote The Lady Eve with Stanwyck in mind after he saw her performance in Remember the Night the year before. Sturges was so impressed with her characterization in that film that he knew she would be ideal as Eve. Fonda, who had four films in release in 1940, including The Grapes of Wrath, was happy to star in a comedy. As Charles Pike, Fonda showed his talent for physical comedy. Fonda’s numerous pratfalls are one of the film’s major delights. Bosley Crowther in the New York Times said, “No one could possibly have suspected the dry and somewhat ponderous comic talent which is exhibited by Henry Fonda as the rich young man.” As Eve, Stanwyck is one part of a trio of card sharks mixing it up with rich swells, like Pike, traveling by ocean liner. Along with her father, “Colonel” Harrington (Coburn) and their “butler” Gerald (Cooper), Eve sees Pike as an easy mark, that is, until she falls in love with him. 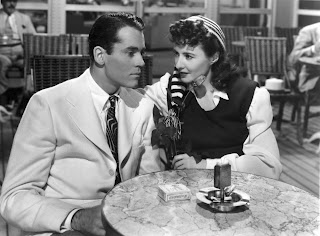 Eve’s and Charles’s love is put to the test when Eve is revealed to be a card shark by the ship’s purser. Upon discovering this, Charles dumps Eve in a most humiliating and devastating fashion. Once Eve recovers, she is determined to get back at Charles by “disguising” herself as The Lady Eve Sedgewick, pretending to be the niece of another con artist “Sir Alfred McGlennan Keith” (Eric Blore). The Lady Eve manages to charm Charles on land in the same way Eve charmed him at sea. She eventually gets Charles to propose and he and The Lady Eve get married in an elaborate society wedding. On their honeymoon, Eve concocts a backstory about her past marriages and romances, turning the tables on Charles, humiliating and hurting him the way he hurt her. Charles leaves her, but it’s revealed that Eve is still in love with Charles in spite of everything (We suspect that Charles is still in love with Eve, but he’s too stubborn and proud to admit it). Will The Lady Eve be revealed as just plain Eve? Will Charles and Eve discover each other and find true love and happiness?

Amidst all the hilarity, there are some serious themes running through the narrative: Can one really find true love? Is love redemptive or is it all a bunch of hooey? These themes would be repeated in more serious productions from Alfred Hitchcock. What was unique about Sturges’s approach is how he was able to point to the character flaws of both the upper and lower classes without malice or a mean spirit. 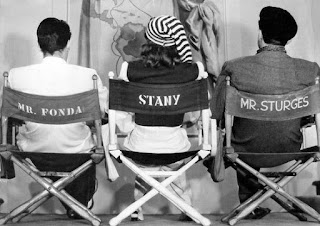 The Lady Eve is filled with a host of great character actors, most of which became part of the “Sturges Stock Company.” This stock company included William Demarest, Eric Blore, and Robert Grieg. The latter two appearing in Sturges’s Sullivan’s Travels, also released in 1941.

When the movie was released, Crowther, declared Sturges, “the most refreshing new force to hit the American motion pictures in the past five years.” He went on to say that a “more charming or distinguished gem of nonsense has not occurred since It Happened One Night.”

Posted by Stephen Reginald at 3:16 PM