Penny Serenade (1941) is an American melodrama directed by George Stevens and starring Irene Dunne and Cary Grant. The film is based on a story that appeared in McCall’s magazine written by Martha Cheavens.

Dunne and Grant star as a couple on the brink of divorce after a tragic event in their lives. While preparing to leave her husband, Julie Adams (Dunne) listens to some old records that take her back to the early days of her relationship with her husband Roger (Grant). Balancing laughter with tragedy, director Stevens (A Place in the Sun, Giant, Shane) strikes all the right notes with this sentimental classic.

P.S. You may need tissues while watching! 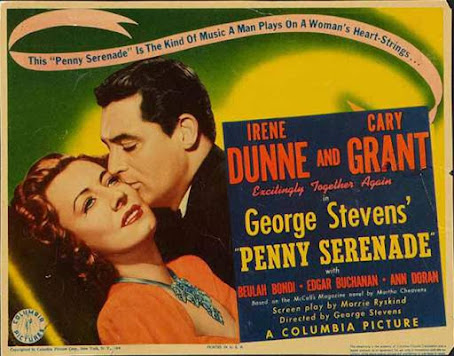 George Stevens (1904 – 1975) was an American film director and producer. He was nominated for five Best Director Academy Awards, winning one for Giant (1956). Stevens got his start in the movies as a cameraman working on many Laurel and Hardy films. Stevens directed many of the top stars of Hollywood’s Golden age including Barbara Stanwyck, Katharine Hepburn, Ronald Colman, Ginger Rogers, James Stewart, Jean Arthur, Carole Lombard, Fed Astaire, Joel McCrea, Alan Ladd, Spencer Tracy, and Elizabeth Taylor. Other popular films directed by Stevens include Annie Oakley (1935), Gunga Din (1939), Woman of the Year (1942), The More the Merrier (1943), I Remember Mama (1948), Shane (1953), and The Diary of Anne Frank (1959).

Irene Dunne (1898 –1990) was an American actress and singer who was one of the most popular movie stars during Hollywood’s Golden Age. She is probably best remembered for her comedic roles, though she first became famous playing in melodramas like Back Street (1932) and Magnificent Obsession (1935). In fact, Dunne was so popular as a star of melodramas that she was dubbed “The Queen of the Weepies” by the press. Her comedic breakout performance was in Theodora Goes Wild (1936) which earned her an Academy Award nomination for Best Actress. She would go on to make other comedy classics like The Awful Truth (1937) where she earned another Best Actress nod, and My Favorite Wife (1940). Dunne and Grant were one of the most popular screen teams in movie history. All three of their films were critical and box office successes. Dunne earned a total of five Academy Award nominations for Best Actress but never won a competitive Oscar. The fact that the Motion Picture Academy never awarded her an Honorary Academy Award for her body of work is a travesty to me.

Cary Grant (1904 – 1986) was an English-born American actor who became one of the most popular leading men in film history. Grant started his career in vaudeville before heading to Hollywood. He became a superstar in the late 1930s in a series of screwball comedies including The Awful Truth (1937) with Irene Dunne. He was a memorable C. K. Dexter Haven in The Philadelphia Story (1940) opposite Katharine Hepburn and James Stewart. He received two Best Actor nominations: Penny Serenade (1941) and None but the Lonely Hearts (1944). Other classic Grant films include Gunga Din (1939), Only Angels Have Wings (1939), and Arsenic and Old Lace (1944). He made four popular films with Alfred Hitchcock: Suspicion (1941), Notorious (1946), To Catch a Thief (1955), and North by Northwest (1959). He was presented with an Honorary Oscar at the 42nd Academy Awards in 1970.

To join us on Zoom for a discussion on December 15, at 6:30 p.m. Central Time, click the link for details and invitation. When you RSVP you will receive an email and link to the discussion.

Posted by Stephen Reginald at 11:57 AM