Road House (1948) is a film noir directed by Jean Negulesco and starring Ida Lupino, Cornell Wilde, Celeste Holm, and Richard Widmark. The black and white cinematography was by Joseph LaShelle (Laura) and the film contains two songs: Johnny Mercer’s “One for my Baby (and One More for the Road)” and “Again” by Dorcas Cochran (words) and Lionel Newman (music). The latter was written specifically for this film. 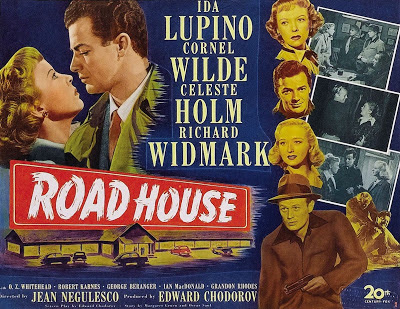 Set at a roadhouse with a bowling alley, the movie revolves around Lily Stevens (Lupino), a singer that Jefty Robbins (Widmark) hires as new entertainment for his roadhouse. Pete Morgan (Wilde), Jefty’s childhood friend, and business manager is suspicious of the new singer and Jefty’s motivations for hiring her. Lily sees the gig as just a job, but Jefty quickly develops romantic feelings for her.

Things get complicated when Lily and Pete, who at the beginning were at odds, begin to have feelings for each other. Will Jefty congratulate the couple on their love or make life miserable for them both? It’s a film noir so what do you think?

Jean Negulesco (1900 – 1993) was a Romanian-American film director. Negulesco studied art in Bucharest with plans on becoming a painter. He visited the United States to become a portraitist, but while in California became interested in the movie business. He got his start at Paramount during the early 1930s where he worked as assistant producer and second unit director. In 1940, he went to Warner Bros. where he directed Humoresque (1946) starring Joan Crawford and John Garfield and Deep Valley (1947) starring Ida Lupino and Dane Clark. His greatest success at Warner’s came with Johnny Belinda (1948) starring Jane Wyman. The film was nominated for 12 Academy Awards, including a nod to Negulesco’s direction, and was a huge critical and commercial success. For some unknown reason, Warners didn’t renew his contract and he moved over to 20th Century-Fox where he became a master of the new Cinemascope wide-screen process, directing How to Marry a Millionaire (1953) and Three Coins in the Fountain (1954). Other films include Three Came Home (1950), Titanic (1953), Daddy Long Legs (1955), and The Best of Everything (1959).

Joseph LaShalle (1900 – 1989) was an American film cinematographer. He won an Academy Award for his black and white work on the film Laura (1944) and was nominated for eight additional Oscars. LaShalle got his start at Paramount where the famous cinematographer Arthur C. Miller took him under his wing. When Miller moved from Paramount to Fox Films, LaShalle went with him. Other major films LaShalled photographed include Cluny Brown (1946), Come to the Stable (1949), My Cousin Rachel (1952), Marty (1955), The Long, Hot Summer (1958), and The Apartment (1960). LaShalle worked closely with directors Otto Preminger and Billy Wilder.

Ida Lupino (1918 – 1995) was an English-American actress, director, and producer. She appeared in over 50 films and was one of Warner Bros. biggest contract players during the 1940s starring in High Sierra (1941), The Sea Wolf (1941), and The Man I Love (1947). After she left Warner Bros., Lupino formed her own production company, producing, writing, and directing films that tackled subjects the big studios wouldn’t touch. During the 1950s, Lupino was the only female director working in Hollywood. She directed several small independent films but really made a name for herself directing for television. Lupino directed episodes of The Twilight Zone (starred in one too), The Rifleman, Bonanza, Gilligan’s Island, It Takes a Thief, Family Affair, and Columbo. In 1966, she directed her one-and-only big-budget studio picture, The Trouble with Angels starring Rosalind Russell and Haley Mills.

Cornel Wilde (1912 – 1989) was a Hungrian-born American actor and film director. Wilde had small roles in films like High Sierra (1941) until he was signed by 20th Century Fox. He was loaned out to Columbia to play the role of Frederic Chopin in A Song to Remember (1945) for which he earned an Academy Award for Best Actor. At Fox, he was a popular leading man. For that studio, he starred in Centennial Summer (1946), Forever Amber (1947), and Road House (1948). With the decline of his acting career, Wilde produced and directed several independent productions including Beach Red (1967) and No Blade of Grass (1970).

Celeste Holm (1917 – 2012) was an American stage, film, and television actress. She won a Best Supporting Actress award for her role in Gentleman’s Agreement (1947) and was nominated for her roles in Come to the Stable (1949) and All About Eve (1950). She originated the role of Ado Annie in the landmark stage musical Oklahoma! (1943).

Richard Widmark (1914- 2008) had a sensational movie debut playing the crazy villain Tommy Udo in director Henry Hathaway’s Kiss of Death (1947). His performance won him a Golden Globe Award for New Star Of The Year – Actor. He was also nominated for the Academy Award for Best Supporting Actor for his performance as Udo. Widmark was under contract to Twentieth Century-Fox where he played mostly villains. Later in his career, he started playing more heroic roles in films like Slattery’s Hurricane and Down to the Sea in Ships (both 1949).

To join un on November 10, 2020, at 6:30 p.m. Central Time for a discussion on Zoom, visit the Chicago Film Club Meetup page for information and links.

Posted by Stephen Reginald at 2:36 PM