Part of the fun of loving movies, is loving the ones that don’t quite hit the mark, the ones that are sometimes so bad they’re good. One of my guilty movie pleasures is 1954’s Elephant Walk

. A big-budget spectacle from Paramount studios, it’s a mixed bag of movie cliches with several allusions to better films. 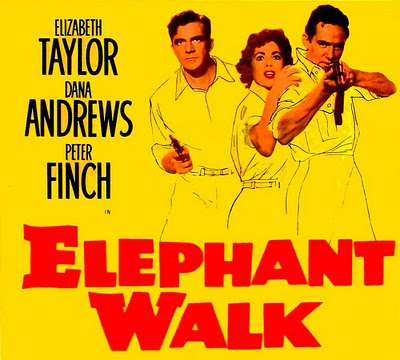 From London Bookshop to Ceylon Tea Plantation
The plot surrounds a tea planter, John Wiley from Ceylon (Sri Lanka), who comes to England at the end of World War II to find a bride to take back with him. The tea planter is the serious and sober Peter Finch. His young bride is the breathtakingly beautiful and young Elizabeth Taylor (she was 23 when the film was released). From the film narrative, we find that this was some kind of a whirlwind romance, with Ruth, a bookstore clerk, (Taylor’s character) hardly knowing anything about her new husband or his family (kind of like Liz Taylor's real life).


South Asian Mandalay
As you probably already guessed, Ruth is at first swept off her feet by John. When she arrives at Elephant Walk, the family mansion, a kind of South Asian Mandalay, its beauty and opulence awe Ruth. She learns that her new home was deliberately built on the path the elephants used to get to their water source by John’s father, alternately known as the “Old Master” and “the Guv’nor.” Apparently, the Old Master, even though long passed away, seems to be the force behind Elephant Walk. Two minutes cannot go by without someone talking about the Guv’nor. You know almost immediately that the elephants will be causing trouble and boy do they ever.

"Didn't I See You in Rebecca?"
When Ruth arrives at Elephant Walk, an army of servants headed by Appuhamy, the estate’s majordomo, greet her. Sinister and reserved, Appuhamy is a male version of Judith Anderson’s character in Rebecca

. The welcome home scene is similar to the Hithcock classic. Even though he is a servant, Appuhamy looks at Ruth with suspicion and disdain. If we jump ahead two years, Mercedes McCambridge’s Luz Benedict, is a female Appuhamy, giving Taylor’s character, Leslie the same kind of treatment in Giant

(a much better film for sure).

Bicycle Polo, Anyone?
At a party to meet John’s friends and associates, Ruth is introduced to Dick Carver, (Dana Andrews) the plantation boss. Carver is instantly attracted to Ruth, and who wouldn’t be? Taylor’s character is sewed into some pretty remarkable Edith Head creations, showing that 23-year-old body off to its best advantage. When Taylor realizes that she’s the only white woman within miles of Elephant Walk, she begins to wonder if she made a mistake by marrying John. When John and his friends stay up to all hours of the night drinking and playing bicycle polo inside the house, Ruth is distraught. As the film progresses, she feels more and more isolated. And then there’s the secret room that only Appuhamy has the key to. It’s the key to the Old Master’s room, a virtual shrine to the dead man, just like the first Mrs. DeWinter’s room in Rebecca. And just like Rebecca, the Old Master’s presence permeates the film. Jeepers, his crypt is in the backyard, just outside Ruth’s bedroom window!

Paris or Bust
While John is confined to bed with a leg fracture from his bicycle polo exploits, Ruth spends time with Dick. As the only one at Elephant Walk who doesn’t worship the Old Master, he becomes Ruth’s confidant. Dick makes a pass at Ruth, but she tries to resist his advances. As time goes by, Ruth plans to leave Elephant Walk and go to Paris with Dick, something Dick was planning to do before Ruth arrived.

But then, a cholera epidemic breaks out and Ruth decides she cannot leave her husband, even though we’re not exactly sure what she sees in the bore. Dick, as played by Andrews, is a much warmer and sympathetic character; it isn’t hard to understand why she (or any other woman under the same circumstances) might want to run off with him. Dick’s character is dressed elegantly in white and khaki suits, often wearing a lightweight fedora. He looks like the tropical version of detective Mark McPherson from Laura

That Pesky Epidemic
Oh, yes, the cholera epidemic. Servants all of a sudden start passing out, falling down and the whole area is put under quarantine. This keeps Ruth from running off with Dick to Paris (rats!). After about two seconds, Ruth throws herself into helping the natives fight the epidemic. Looking like Myrna Loy in The Rains Came

, she spends her days cutting pieces of cloth, filling jugs with water, disinfecting things, and constantly wiping the sweat off her brow while Appuhamy, her new best friend, tells her to rest. Just when you think things can’t get any worse, the elephants come back, reclaiming their pathway while the estate is left unguarded.

Elephants Rule!
The elephants stampede Elephant Walk, demolishing the wall that surrounds it. They enter the house, upending the furniture, knocking over burning candles and chandeliers. And they maul Appuhamy, Ruth's new BFF right in front of her eyes (she closes them of course) while she screams in terror. As the elephants destroy the house, it catches fire. Ruth tries to outrun the elephants and escape, but finds herself trapped. Her husband back from burying the dead cholera victims rescues Ruth from the fire and the elephants, but Elephant Walk is no more. As the mansion burns to the ground, Ruth recommits herself to John, just like, oh, yeah, Rebecca (and Jane Eyre

too)! Dick coming back for Ruth, sees her on a hill with her husband. Realizing that he and Ruth have no future together, Dick decides to go to Paris by himself since Ruth was the only reason he stayed at Elephant Walk for as long as he did. The End.

The Classic Movie Man's Verdict
Even with all the cliches and sometimes hackneyed dialogue, I still find this film incredibly compelling. Maybe it’s the cast, although my favorite New York Times critic, Bosley Crowther, had these kind words for the three stars: “Miss Taylor's performance of the young wife is petulant and smug. Mr. Andrews is pompous as the manager. And Mr. Finch, as the husband, is just plain bad.” Oh, my. On the plus side, the movie looks good. The on-location cinematography isn’t too bad. The score by Franz Waxman is lush and beautiful. Taylor’s Edith Head costumes are stunning and show the actress off to her best advantage. On the negative side, the process photography looks cheap. There’s a scene where Ruth and Dick are riding horses. The horses are at a slow trot, but the background is practically racing by. Perhaps, audiences in 1954 were more forgiving than we are today, but it looks really fake. The direction by William Dieterle can be described as plodding at best; nothing seems to flow very smoothly. But fortunately, those stampeding elephants save the day by adding some much needed action and excitement.

I mentioned Rebecca earlier in this piece and I think it tries to borrow some of the tension and suspense that movie engendered, but with limited success. The comparisons, some already noted are too obvious: Appuhamy as a male Mrs. Danvers, the room that is a shrine, and the climatic fire that destroys the mansion and the memory of the Old Master. But that’s what films do, borrow from each other. Some do so successfully, some not so. Elephant Walk falls into the not so category. Still as mentioned before, it’s somehow compelling. It’s one of my classic movie guilty pleasures. And that’s okay. In spite of it all, enough people went to see Elephant Walk in 1954 to make it a box office hit.

What are your movie guilty pleasures? I’d love to hear from you.
Posted by Stephen Reginald at 9:54 PM