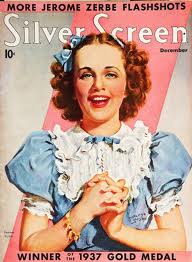 Deanna Durbin was born on December 4, 1921 in Winnipeg, Manitoba, Canada. In 1923, Durbin’s parents moved to Southern California where they raised Deanna and her older sister Edith. From a young age, Durbin’s extraordinary singing voice was recognized and nurtured. Before long, Hollywood took notice and Durbin was signed by Metro-Goldwyn-Mayer in 1935.

At M-G-M, there was another girl singer singed to a movie contract named Judy Garland. The studio starred Durbin and Garland in a short film, Every Sunday (1936). The film was a showcase for the vocal talents of both young women. Garland’s contemporary “swing” style of vocalization contrasted with Durbin’s classical operatic voice. After the film’s release, the studio dropped Durbin from their star roster, but kept Garland. There are a lot of stories surrounding the reason Durbin’s contract was not renewed, but it just appears to have been more of an oversight than the studio preferring Garland.

(1936) was a box office bonanza and is credited with saving the struggling studio from bankruptcy. The film was so popular that it made Durbin an overnight sensation. In 1939 she, along with Mickey Rooney, received a juvenile Oscar for her film work in 1938.

In the late 1930s and early 1940s, Durbin was one of the biggest and most beloved movies stars in the entire world. She was one of Anne Frank’s favorites; Frank had a picture of Durbin on her bedroom wall, in the home where the Frank family hid during World War II. When Durbin received her first screen kiss in 1939’s First Love

, from Robert Stack, the press dubbed it “the kiss heard around the world.”

By the time Durbin celebrated her 21rst birthday, she was the highest paid woman in the United States and the highest-paid female movie star in the world. At her peak, she was earning $400,000 per picture. One of the best movies she made during this period was the romantic comedy It Started With Eve

(1944), based on a story by W. Somerset Maugham. The dark-themed movie paired her with screen newcomer, Gene Kelly

. With the innocuous title, Durbin and Kelly fans were probably expecting a musical rather than a noirish, melodrama. To many, it proved Durbin could act and if given the proper vehicle, she might have transitioned to more challenging adult roles. However, this was not to be; Durbin’s fans preferred her in lighter fare.

During the rest of the 1940s, Durbin continued to star in successful light romantic comedies. Even though the quality of her films wasn’t always the best, she was still a big box office draw and her fan club was the largest in the world. Growing tired of the poor scripts Universal was giving her, Durbin later declared, “I couldn’t go on forever being Little Miss Fixit who burst into song.” By 1949, Durbin turned her back on Hollywood and decided to retire at the ripe old age of 28. She married for a third time to producer-director Charles David and moved to France where she lived a very private life as wife and mother.

Durbin turned down numerous offers to star in films at other studios. Bing Crosby wanted her to costar with him in Top o’ the Morning and A Connecticut Yankee in King Aruthur’s Court (both 1949). Supposedly, Durbin was Alan Jay Lerner’s first choice to play Eliza Doolittle in the original Broadway production of My Fair Lady. For years the offers would come and Durbin would turn them down. She shunned the press for decades. She reluctantly agreed to an interview in 1983.

In spite of Durbin’s disillusionment with Hollywood, she left a body of work that documents her extraordinary vocal range. Combined with her natural acting abilities, Durbin endeared herself to a generation of moviegoers. Today, Durbin’s films might seem corny and formulaic, but even in her most pedestrian vehicles, her warmth and charm shine through. Deanna Durbin may have turned her back on Hollywood and all that came with screen stardom, but her fans never turned their backs on the girl with the golden voice.

For a glimpse of Durbin and her extraordinary voice, check out the clip below from Mad About Music

Posted by Stephen Reginald at 7:40 AM