Classic Movie Man Takes a Look at “The Artist” 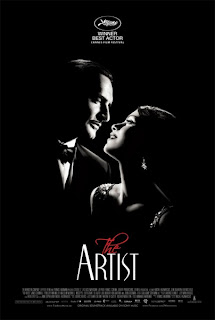 The 2011 release, The Artist is one-part A Star Is Born, one part Singing in the Rain, and another part The Jazz Singer. French director Michel Hazanavicius has managed to capture the look and feel of Hollywood when the movie studios were making the transition from silent films to “talkies.” During this transition, some movie stars managed to stay on top, while others faded into obscurity.

A Falling Idol
The Artist is the story of silent movie idol George Valentin (Jean Dujardin) who finds his career on the skids with the advent of sound. In contrast, young starlet Peppy Miller (Bérénice Bejo) finds her career soaring as talkies gain acceptance with the movie-going public. The film spans the years 1927 (the year of The Jazz Singer) through 1932, the year Metro-Goldwyn-Mayer’s all-star (and all talking) blockbuster Grand Hotel won the Academy Award for Best Picture.


A Star is Born
The movie opens at the premier of Valentin’s latest action film A Russian Affair. While posing for photographs outside the theater, Valentin bumps into a pretty fan, Miller. A photographer snaps a picture of them together, which ends up on the cover of Variety with the headline “Who’s That Girl?” Miller uses her newfound fame and auditions for Valentin’s movie studio. Over the objections of studio boss Al Zimmer (John Goodman), she is given a bit role in Valentin’s next film at the star’s insistence. Once it’s clear that talking pictures are the future, Zimmer fires all his silent film stars, including Valentin who is convinced talkies are just a fad. In the meantime, Miller has progressed from bit roles to leads and is quickly promoted by the studio as one of its brightest new stars.

Using all his own resources, Valentin produces, directs, and stars in a silent epic that has the misfortune of opening on the same night as Miller’s latest talking picture. Miller’s film is a smash and Valentin’s is a bomb. Shortly thereafter Valentin’s wife (Penelope Ann Miller) leaves him, he goes broke, and he ends up living in a small apartment with his pet dog and faithful butler (James Cromwell). Miller, who has never forgotten his kindness toward her, buys all his possessions at an auction and keeps them in her home, unbeknownst to Valentin. In a fit of depression over his fall from grace, Valentin sets his films on fire and he almost dies. If not for his faithful dog (a cross between Lassie, Rin TinTin, and Asta) alerting a police officer, Valentin would have been lost.

Dancing Into Our Hearts
Miller takes Valentin into her home to nurse him back to health and for a time it looks like things will be alright. When Valentin discovers his possessions in storage in Miller’s Hollywood mansion, he returns to his burned out apartment and attempts to commit suicide. Miller suspecting the worst goes in search of Valentin. Finding him just in time, she convinces him all is not lost and that she loves him. Since she’s a major movie star, she insists on having Valentin costar with her in her next film, threatening to quit if Zimmer doesn’t relent.

A Plan Emerges
Remembering what a good dancer Valentin is, Miller comes up with a plan. The two perform a tap dance number for Zimmer and the movie production crew. During their number, we hear the music play and the sound from their tap shoes. Their performance is a smash and they get the go-ahead to make a movie together. Zimmer asks for one more performance and Valentin says “with pleasure,” revealing a heavy French accent.

Clever Use of Sound
Most of the film is silent with an accompanying sound track, but there are occasions where sound is cleverly employed. When sound movies begin to gain popularity, Valentin dreams “in sound.” The score borrows from other musical pieces and soundtracks, including a large part of Bernard Herrmann’s Vertigo score during the film’s climax. Hazanavicius reportedly did a lot of research for The Artist, including viewing many silent films so he could copy the best techniques. The research seems to have paid off. The Artist captures the look and feel of early Hollywood and Valentin and Bejo (Hazanavicius’s wife) are enormously appealing. Valentin is a cross between Douglas Fairbanks Sr. and John Barrymore, having a profile rivaling the latter. Bejo resembles Natalie Wood and Leslie Caron. But she seems to have Wood’s camera instincts; she’s always framed just right.

Fictional History of the Movies
In an entertaining way, Hazanavicius has given us a fictional account of the history of the movies. There were many stars like Valentin who had foreign accents and/or a poor command of the English language whose careers ended with the advent of sound. Executives at M-G-M were extremely nervous when Greta Garbo spoke her first words in Anna Christie (1930). “Garbo Talks” they announced in pre-publicity for the film, but studio heads weren’t sure how audiences would react to her Swedish accent. They loved Garbo, of course, but not all silent film stars were so fortunate. When Valentin reveals his French accent, it’s clear he understood it could work against him in the new world of talking pictures. But just like in the movies, with the love and support of a woman like Peppy Miller, George Valentin’s career lives once again. For classic movie fans, The Artist is a rare treat in today’s motion picture landscape. Give it a try! 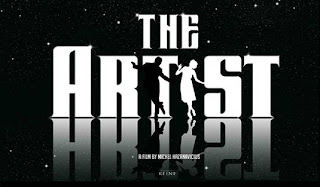 Posted by Stephen Reginald at 3:05 PM