Holiday Family Fun at The Venue at Daystar Center

The Greater South Loop Association and the Chicago Film Club are having a holiday event, Saturday, December 7, 2013 at 5:30 p.m. at The Venue at Daystar Center, 1550 S. State St., before the screening of the classic film Christmas in Connecticut starring Barbara Stanwyck, Dennis Morgan, and Sydney Greenstreet. 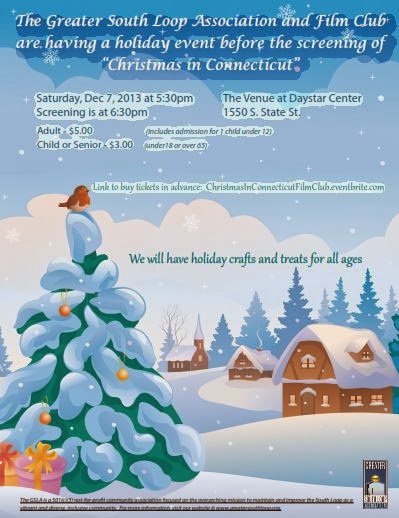 Holiday Treats and Crafts for All Ages
There will be holiday crafts and treats for all ages, surprises and give-aways. The Chicago Film Club’s screening of Christmas in Connecticut is at 6:30 p.m. A copy of the new Barbara Stanwyck biography will be given away before the movie. A Life of Barbara Stanwyck: Steel – True 1907 – 1940 by Victoria Wilson was released at the end of November and retails for $40. To purchase tickets to the movie, which includes the holiday event—crafts and treats—click here.

Screening of a Holiday Classic
Christmas in Connecticut was a big hit when first released, but is sometimes overlooked in the lists of great Christmas movies. Made when Barbara Stanwyck was at her peak, the story is clever and genuinely funny. Stanwyck is Elizabeth Lane, a writer for Smart Housekeeping magazine, who delights her readers with recipes and homemaking hints. Her character is a sort of 1940s version of Martha Stewart, except, unlike Martha, she has no domestic skills whatsoever. When compelled by her magazine publisher to entertain a war hero, Stanwyck goes into high gear to present herself as the perfect domestic goddess the reading public and her publisher think she is. Stanwyck, often cast in heavy melodramas was a great comic actress. This holiday charmer fits right in with our screwball comedy series.

Classic Movie Film Club
The Chicago Film Club explores classic Hollywood cinema at The Venue at Daystar Center. We enjoy viewing movies on a big screen with an audience. By providing background information with each film’s introduction and discussion afterward, we attempt to put each film in the context of the era in which it was produced. We discuss what makes each film a classic and look for its influences in modern film. The group is led and moderated by Steve Reginald, an amateur film historian and classic movie enthusiast. Steve is a writer/editor. He teaches adult education classes on classic movies at Facets Film School in Chicago.


For more information on the Chicago Film Club (free to join), click here.