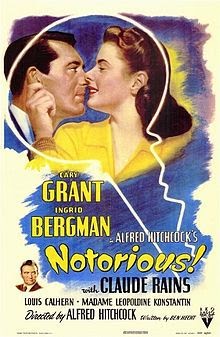 It’s complicated
Notorious is the most complex and perhaps the best of Alfred Hitchcock’s films produced during his first decade in America. The film features the star power of Cary Grant and Ingrid Bergman, two of the director’s favorite performers. It also showcases the director’s technical storytelling skills, skills that he honed during his tenure in Hollywood.

Pretty as a picture
Grant and Bergman were two of the most glamorous movies stars of the day and they are photographed exquisitely by famed cinematographer Ted Tetzlaff. The close-ups of the two stars are beautifully lit and staged. Many of the shots are framed so well that they stand on their own as works of art.

Nazis in hiding
The plot revolves around Alicia Huberman (Bergman), the American daughter of a convicted Nazi spy. Intelligence agent T. R. Devlin (Grant) recruits her to infiltrate a group of Nazis hiding out in Brazil after World War II. Devlin arranges things so that Alicia reacquaints herself, with Alexander Sebastian (Claude Rains), the leader of the Nazis in Rio de Janeiro. Sebastian was smitten with Alicia several years earlier and is eager to try and woo her once again.

Cover blown
Things get complicated when Sebastian proposes marriage to Alicia. Devlin who has feelings for her reacts badly to this development and withdraws emotionally. Alicia marries Sebastian and continues her work as an agent of the United States government. After a party at their home, Sebastian discovers that his wife is a double agent and has been spying on him. With the help of his mother (Leopoldine Konstantin), Sebastian sets about to slowly poison Alicia in an attempt to hide her true identity from his fellow Nazi conspirators. Will his plan be successful?

Backstory: David O. Selznik had originally planned to produce Notorious himself, but sold the property to RKO. Selznik lobbied for Joseph Cotton, who was under contract to the producer, to play Devlin. Hitchcock wanted Cary Grant. Hitchcock obviously won that fight. Clifton Webb and George Saunders were considered for the role of Sebastian. Selznik recommended Claude Rains for the role, which Hichcock agreed with. Notorious premiered at Radio City Music Hall in New York City on August 15, 1946 with Hitchcock, Bergman and Grant in attendance.

Posted by Stephen Reginald at 7:57 PM