Of Human Bondage (1934) is a pre-Code drama directed by John Cromwell and starring Leslie Howard, Bette Davis, and Francis Dee. The film was based on W. Somerset Maugham’s 1915 novel. The music was by Max Steiner.

Leslie Howard stars as Philip Carey a club-footed British man studying art in Paris. After his teacher tells him that he really has no talent as an artist, he returns to London to study medicine. While in London, he falls desperately in love with a waitress named Mildred Rogers (Davis). Philip’s passion is constantly spurned by Mildred, but he finds himself hopelessly drawn to her, to the point of financial and personal ruin.

Will Philip escape from his destructive infatuation with Mildred or will it destroy his life and medical career? 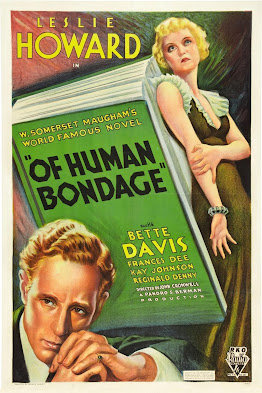 Of Human Bondage is a pre-Code film. Films released before 1934 did not follow strict rules as to what themes or characters could be expressed onscreen. Prior to the implementation of the Production Code, the public was becoming concerned with explicit film content. Rather than be subjected to government oversight, the movie studios united to create and live by a set of rules that each studio would abide by. With the collapse of the studio system, the Production Code ended in 1968 in favor of the film rating system we have today.

John Cromwell (1886 – 1979) was an American film and stage director. Cromwell started his career as an actor on the stage and in the early days of talking pictures. He was under contract to Paramount where he directed many pre-Code films. Some of the stars he directed during this time included Kay Francis, William Powell, and Jean Arthur. In 1933, he moved to RKO and directed Irene Dunne in Ann Vickers (1933), Spitfire (1934) with Katharine Hepburn, and Of Human Bondage (1934) with Leslie Howard and Bette Davis. Of Human Bondage was a tremendous box office success and made Cromwell a top director in Hollywood. Other films he directed include Little Lord Fauntleroy (1936), The Prisoner of Zenda (1937), Since You Went Away (1944), Anna and the Kind of Siam (1946), and Dead Reckoning. He is the father of actor James Cromwell.

Leslie Howard (1893 – 1943) was an English film and stage actor. He was a popular movie star on both sides of the Atlantic, working in both England and the United States. He is probably best remembered for playing Ashley Wilkes in Gone with the Wind (1939), but Howard was a big box office draw during the 1930s starring in The Scarlet Pimpernel (1934), The Petrified Forest (1936), Pygmalion (1938), and Intermezzo (1939). Howard’s life and career were cut short when the plane he was flying in was shot down over the Atlantic in 1943 during World War II.

To join the discussion on Zoom on January 26, 2021, at 6:30 p.m. Central Time, click here. Once you RSVP, you will get an invitation with links to the discussion.

Posted by Stephen Reginald at 3:07 PM