Screening of “East Side, West Side” at Daystar Center June 19


East Side, West Side (1949) is a melodramatic crime drama that stars Barbara Stanwyck, James Mason, Van Heflin, and Ava Gardner. Mason is Brandon Bourne, the unfaithful husband of Jessie Bourne (Barbara Stanwyck). Mason is infatuated with the beautiful and manipulative Isabel Lorrison (Ava Gardner). Jessie does her best to keep her marriage together, but when Isabel is murdered, all bets are off. Police officer Mark Dwyer (Van Heflin) sets out to find the murderer, while finding himself drawn to Jessie in the process. 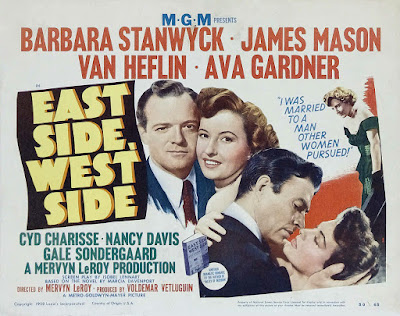 Stephen Reginald is a freelance writer and editor. He has worked at various positions within the publishing industry for over 25 years. Most recently he was executive editor for McGraw-Hill’s The Learning Group Division. A long-time amateur student of film, Reginald hosts “Chicago Film Club,” a monthly movie event held in the South Loop, for the past two years. Reginald has also taught several adult education film classes at Facets Film School, Chicago.
Posted by Stephen Reginald at 6:00 AM