Claire Trevor and John Wayne head the cast of “Stagecoach”

Stagecoach (1939) is an American Western classic directed by John Ford and starring Claire Trevor and John Wayne. The film was produced by Walter Wanger Productions and the cinematography was by Bert Glennon (Young Mr. Lincoln-1939, Our Town-1940, Destination Tokyo-1943).

When a group of strangers boards a stagecoach in June of 1885, from Tonto, Arizona Territory, to Lordsburg, New Mexico, little do they realize their lives will forever be changed. On that stagecoach is Dallas (Trevor) a prostitute who is run out of town by the all-female Law and Order League, Doc Boone (Thomas Mitchell), an alcoholic, Mrs. Lucy Mallory, (Louise Platt) an officer’s wife, whiskey salesman Samuel Peacock (Donald Meek), and gambler and Southern gentleman Hatfield (John Carradine). Along the way, they pick up dishonest banker Henry Gatewood (Berton Churchill) who has just embezzled money from his bank.

As if the stage wasn’t crowded enough, they meet up with the Ringo King (Wayne) who escaped from jail to avenge the deaths of his father and brother at the hands of Luke Plummer (Tom Tyler).

How these diverse personalities interact along the way is what makes the film so engaging. Will they be at each others’ throats or will they be able to pull together as they ride through dangerous Indian territory? 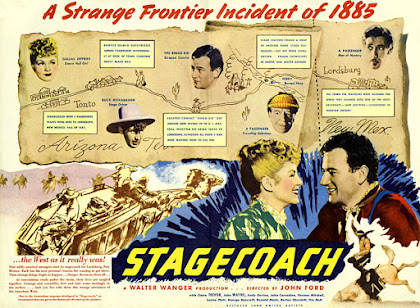 John Ford (1894 - 1973) was an American film director who won a record four Academy Awards, more than any other director in history. He is perhaps best known for his western films, but ironically the Academy Awards he won weren’t for his classic westerns like Stagecoach (1939) and The Searchers (1956). Ford got his start in silent film, first as an actor, then as a writer-director. He directed many silent films including the epic The Iron Horse (1924). Once the sound era arrived, Ford was one of its first pioneers. He hit his stride in the 1930s with films like The Lost Patrol (1934), The Whole Town’s Talking (1935), and The Informer (1935), which brought Ford his first Academy Award for Best Director. Other popular Ford films include The Hurricane (1937), Wee Willie Winkie (1937), Young Mr. Lincoln (1939), Drums Along the Mohawk (1939), and The Grapes of Wrath (1940) the last three all starring Henry Fonda. He also had a long collaborative relationship with John Wayne. Wayne starred in many classic Ford films including She Wore a Yellow Ribbon (1949), The Quiet Man (1952), The Searchers, and The Man Who Shot Liberty Valance (1962).

Walter Wanger (1894 - 1968) was an American film producer. He was active in films from 1910 until 1963. Wanger attended Dartmouth College and served in the United States Army during World War I. While working for what was to become Paramount Studios, during the early days of talking films, he recruited Broadway performers like Claudette Colbert, Jeanette MacDonald, Fredric March, and Miriam Hopkins to the movies. He also brought directors George Cukor and Rouben Mamoulian to the studio. Some of the films produced by Wanger include Foreign Correspondent (1940), The Long Voyage Home (1940), Scarlet Street (1945), The Reckless Moment (1949), Invasion of the Body Snatchers (1956), I Want to Live! (1958), and Cleapatra (1963). Wanger was married to actress Joan Bennett (1940 - 1965).

Claire Trevor (1910 - 2000) was an American actress who appeared in over 60 movies. She received nominations for the Academy Award for Best Supporting Actress for Dead End (1937), and The High and the Mighty (1954). She won the award for her performance in Key Largo (1948). Trevor got her start on the New York stage and made her film debut in 1933. She also appeared on radio with Edward G. Robinson in the popular radio program Big Town. Trevor’s most famous role is probably Dallas in Stagecoach, but she had other memorable roles in Murder, My Sweet (1944), and Born to Kill (1947). Her last film role was in Kiss Me Goodbye (1982) where she played Sally Field’s mother.

John Wayne (1907 - 1979) was an American actor and filmmaker. Nicknamed Duke, Wayne was a pop culture icon and one of the most popular movie stars of all time. During the end of the silent era, Wayne worked on movie sets and played bit parts in movies. He got the chance to play the lead in director Raoul Walsh’s The Big Trail (1930). The Western was an early widescreen epic and a box office disaster, which relegated Wayne to roles in a string of B Westerns. It wasn’t until his role as the Ringo Kid in Stagecoach that he became a star of A films who was now paired with some of the top actresses of the day. Wayne played a variety of roles in the movies but he is most identified with the Western genre and the movies he made with director John Ford. Some of Wayne’s popular films include Red River (1948), The Quiet Man (1952), Rio Bravo (1959), The Searchers (1956), and The Longest Day (1962). Wayne won his one and only Best Actor Academy Award for his role in Tue Grit (1969).

Posted by Stephen Reginald at 7:34 PM