Review of “I Walk Alone” at #NoirCityChicago

I spent Sunday evening taking in a screening of I Walk Alone at Noir City Chicago at the Music Box Theatre, . I hadn’t seen this film before so it was a real treat. Another treat was the restored digital transfer, which was virtually flawless.

Introduced by Eddie Muller, Film Noir Foundation Founder and President, and host of Noir Alley on Turner Classic Movies, Muller said that this Hal Wallis independent production (released through Paramount) was a way to showcase the stars—Burt Lancaster, Lizabeth Scott, Wendell Corey, and Kirk Douglas—he had under contract.
The plot is a simple one: Lancaster and Douglas were partners selling booze during prohibition. During a run, the two were followed by the police so they decide to split up, thinking one of them would be able to make it to safety, but vowing that they would help the other if caught and profits would be split 50/50.

Well, 14 years later, is out of prison and anxious to get his share of the profits from the business. Douglas who now runs a successful, but shady, nightclub, dissolved their old partnership and claims that ’s share amounts to less than $3000. This news sends into a rage threatening to kill Wendell Corey, who set up the new corporation and does the books for the club.

In the middle of all this is Lizabeth Scott, a singer at the nightclub. has been stringing her along, all the while romancing a rich socialite. He plans on marrying her because he thinks she can help bring a higher class clientele to the club. Once this is revealed to Scott, her sympathies end up with . She wants to help him, but doesn’t want him to resort to anything that would send him back to jail. 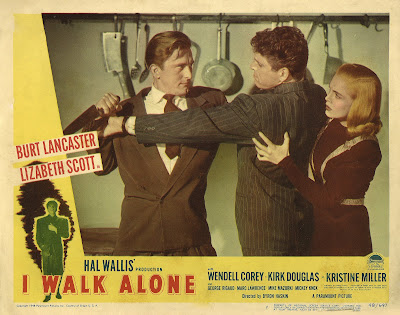 Like all classic films noir, the dialogue is sharp and snappy and delivered by a cast of pros. As the club singer, Scott wears a variety of fashions designed by the legendary Edith Head, and she wears them very well, I might add. Additionally, I don’t think one hair on Scott’s head was out of place through the entire movie, which is remarkable since she gets pushed around a bit.

It was fun to see Lancaster, Scott, and Douglas ( is the only one still with us at 101!) so young. Muller said it looked like there was a bit of a competition between Lancaster and Douglas as to who could chew more scenery! And chew they do, and that’s what makes the movie so enjoyable.

I Walk Alone is now available on DVD in a restored version produced by the Paramount Pictures Archive.

Posted by Stephen Reginald at 4:48 PM