Black Narcissus (1947) is a psychological drama directed by Michael Powell and Emeric Pressburger, and starring Deborah Kerr, Sabu, David Farrar, and Flora Robson. The film was written and produced by Powell and Pressburger. The cinematography is by Jack Cardiff (The African Queen, The Red Shoes).

The plot concerns a group of Anglican nuns who set up a school and hospital in the Himalayas. General Toda Rai invited the nuns and he has given them an old palace on a high cliff to set up their ministry. The location is a challenging one with the high altitude and the never-ceasing wind. A group of monks tried to establish their order in the palace but were unsuccessful. Sister Clodagh (Kerr) is determined to be a success in her order’s mission. The British general agent, Mr. Dean (Farrar) doubts the sisters will make it past the monsoon season.

Sister Clodagh’s job is complicated by the differing personalities of the nuns in her charge including Sister Ruth (Kathleen Byron) who is unsure of her calling and seems fixated on gaining the attention of Mr. Dean. 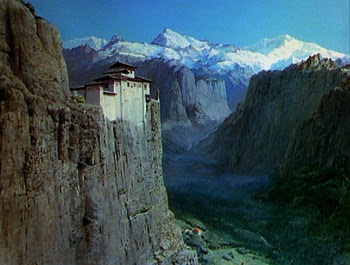 Michael Powell (1905 - 1990) and Emeric Pressburger (1902 - 1988) were English filmmakers who wrote, produced, and directed their films through their film production company The Archers. The two produced and directed such classics as The Life and Death of Colonel Blimp (1943),  I Know Where I’m Going! (1945),  A Matter of Life and Death (1946), and The Red Shoes (1948). Powell and Pressburger have influenced generations of filmmakers including Martin Scorsese and Francis Ford Coppola.

Deborah Kerr (1921 - 2007) was a British actress who had a long career in film, theatre, and television. Kerr was nominated six times for the Academy Award for Best Actress; she holds the record for the most nominations in that category without a win. Some of Kerr’s classic films include From Here to Eternity (1953), The King and I (1956), An Affair to Remember (1957), and The Night of the Iguana (1964). Although Kerr did not win a competitive Academy Award, she was awarded an Academy Honorary Award in recognition of her body of work in film.

Sabu (born Selar Sabu) (1924 - 1963) was an Indian actor who later became an American citizen. Throughout his career in film, he went by the name Sabu. He starred in films during the 1930s - 1940s in Britain and the U.S. His first important film role was in Elephant Boy (1937) which was an adaptation of the Rudyard Kipling story Toomai of the Elephants. Other films he starred in include Drum (1938), The Thief of Bagdad (1940), and Jungle Book (1942).

David Farrar (1908 - 1995) was an English stage and film actor. He starred in several Powell and Pressburger films including The Small Back Room (1949), Gone to Earth (1950), and probably his most famous role as Mr. Dean in Black Narcissus (1947), the role that made him a star. Hollywood came calling and during the 1950s, he starred alongside Ann Blyth, Tony Curtis, Janet Leigh, John Wayne, and Virginia Mayo.

Jean Simmons (1929 - 2010) was a British actress film actress who had tremendous success in Hollywood. She got her start in English films like Caesar and Cleopatra (1945), Great Expectations (1946), and Black Narcissus. She became an international star with her role as Ophelia in Laurence Olivier’s production of Hamlet (1948), for which she received an Oscar nomination. In the U.S. she was under contract to Howard Hughes who refused to loan her out to Paramount to star in Roman Holiday (1953). Simmons was director William Wyler’s first choice for the role. Other films followed including Young Bess (1953) where she played a young Queen Elizabeth I, The Robe (1953), the first film released in the CinemaScope widescreen process. She co-starred with Marlon Brando in Desiree (1954) and Guys and Dolls (1955).  Other important films include The Big Country (1958), Home Before Dark (1958), and Elmer Gantry (1960).

It's a wonder in Technicolor. The colors are so vibrant and the photography is among the best you will ever see.

The film features Deborah Kerr’s breakout performance and features a young Jean Simmons, just a few years from being a star in her own right.

You’ll almost believe you’re in the Himalayas due to the magnificent matte paintings.

The psychological aspect of the film is hypnotic; it will instantly draw you in.

One of the finest examples of the Powell Pressburger partnership.

Posted by Stephen Reginald at 5:48 PM