Walter Pidgeon is the subject of a “Man Hunt”

Man Hunt (1941) is an American political thriller directed by Fritz Lang and starring Walter Pidgeon and Joan Bennett. The film is based on the novel Rogue Male (1939) by Geoffrey Household. The screenplay was written by Dudley Nichols and Lamar Trotti. The cinematography was by Arthur C. Miller and the music was by Alfred Newman.

The film takes place in 1939 with renowned British big-game hunter Captain Alan Thorndike (Pidgeon) attempting to assassinate Adolph Hitler close to his residence near Berchtesgaden. Thorndike is captured at brought before Major Quive-Smith (George Sanders). Thorndike tells the major he wasn’t really going to kill Hitler but just wanted to see if he could just for sport. Through a strange course of events, Thorndike escapes the Nazis and goes on the run. He meets Jerry (Bennett) a young woman who hides him in her apartment. Jerry acts as a go-between for Thorndike and his diplomat brother, Lord Risborough (Frederick Worlock).

Will Thorndike be able to allude the Nazis and return to the sporting life he once knew? 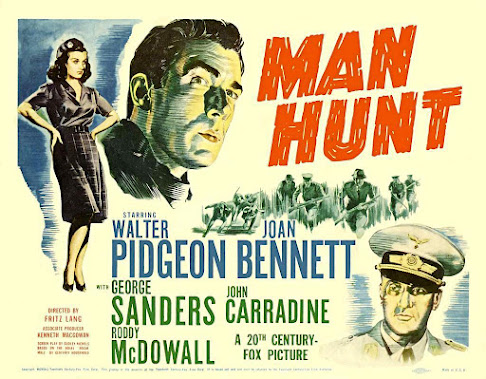 Walter Pidgeon (1897 - 1984) was a Canadian-American actor. During his long career, he was nominated for two Best Actor Academy Awards—Mrs. Miniver (1942) and Madame Curie (1943). Pidgeon worked on the stage before he entered films, making his Broadway debut in 1925. When he starting working in film, he starred in musicals. Once the interest in musicals declined, he began making a name for himself in dramas and comedies during the mid-1930s. His lead role in How Green Was My Valley restored his popularity. He was first paired with Greer Garson in Blossoms in the Dust (1941). They made a total of eight films together, making them one of the screen’s most popular acting teams. Some of their other films include Mrs. Miniver (1942), Mrs. Parkington (1944), Julia Misbehaves (1948), and That Forsyte Woman (1949). Pidgeon has success on his own in films like Week-End at the Waldorf (1945), The Bad and the Beautiful (1952), and the science fiction classic, Forbidden Planet (1956). One of Pidgeon’s last film roles was Funny Girl (1968) where he portrayed Florenz Ziegfeld. 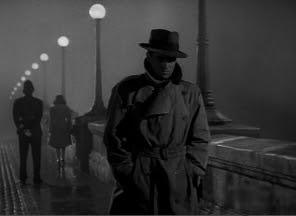 What did you think of Walther Pidgeon as the hero?

Before the film was released, the studio was concerned that it was promoting U.S. involvement in World War II. Did you see that promotion in the film?

Does the film remind you of other similar films you’ve seen?

What did you think of Joan Bennett’s performance? Did you think she and Pidgeon had good chemistry on screen? Does the romance work or would the film have been better without it?

Posted by Stephen Reginald at 3:47 PM