Screening of “Shadow of a Doubt” at Daystar Center November 10

Shadow of a Doubt (1943) was Alfred Hitchcock’s personal favorite of all his films. It is packed with heart-pounding suspense and truly amazing performances. When Uncle Charlie (Joseph Cotton) visits his sister’s family in Santa Rosa, CA, his niece and namesake “Young Charlie” (Teresa Wright) begins to suspect that he may be the “Merry Widow Murderer,” wanted by the authorities. As Young Charlie’s suspicions about her uncle prove to be true, she has a tough decision to make. Will she report her uncle to the detectives that are tailing him or will she let him get away with murder? With a unique mixture of charm and menace, Cotton’s characterization is one of the creepiest in the history of film. 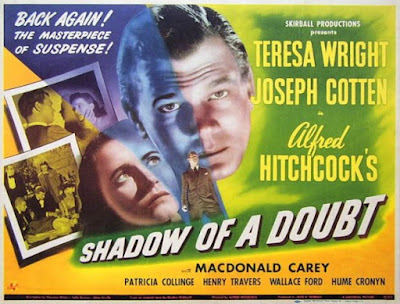 Considered Hitchcock’s first great American film, it features an extraordinary supporting cast that includes, MacDonald Carey, Patricia Collinge, Henry Travers, Wallace Ford, and Hume Cronyn, in his very first screen role. "Shadow of a Doubt" also has the distinction of being the only film Hitchcock made on location.

Have some Joe and Enjoy the Show!
Before the movie, grab a cup of coffee from Overflow Coffee Bar, located within the Daystar Center. You can bring food and beverages into room 102.
Join the Chicago Film club; join the discussion
Twice a month we screen classic films and have a brief discussion afterward. For more information, including how to join (it’s free), click here. The Venue 1550 is easily accessible by the CTA. Please visit Transit Chicago for more information on transportation options.

Stephen Reginald is a freelance writer and editor. He has worked at various positions within the publishing industry for over 25 years. Most recently he was executive editor for McGraw-Hill’s The Learning Group Division. A long-time amateur student of film, Reginald hosts “Chicago Film Club,” a monthly movie event held in the South Loop, for the past two years. Reginald has also taught several adult education film classes at Facets Film School, Chicago.
Posted by Stephen Reginald at 5:17 PM