The plot surrounds Stanton “Stan” Carlisle, a low-level carny who aspires to greater things. He manages to get by with his good looks, charm, and quick wit. On the surface, it appears that he cares about people, but he’s just using them on his way to the top. The film narrative is a dark one, one that 20th Century-Fox studio head Darryl F. Zanuck didn’t want to make. 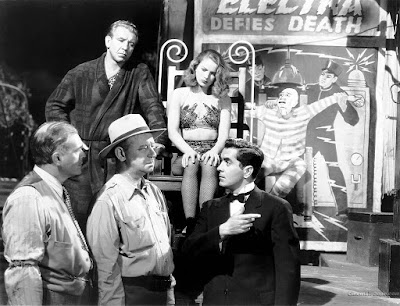 Power was to 20th Century-Fox what Clark Gable was to M-G-M; he was the studio’s top box office draw. Power enlisted in the United States Marine Corps in 1942. He was released from active duty in 1946. Zanuck was anxious to get Power back on the screen. Power wanted to make Nightmare Alley, but Zanuck thought it was inappropriate for the handsome leading man. Power struck a deal: he would star in the more commercial The Razor’s Edge if he could also star in Nightmare Alley.

Zanuck relented, but his heart wasn’t in it and when the film was released and wasn’t an instant hit, he discontinued promotion and pulled the film from distribution.

Edmund Goulding (1891 – 1955) was a screenwriter and director. His directing career started during the silent era, but he moved easily to talkies directing some of the best-remembered films from Hollywood’s Golden Age including Grand Hotel (1932), Dark Victory (1939), The Old Maid (1939), and The Razor’s Edge (1946).

George “Georgie” Jessell (1898 – 1981) was an actor, singer, songwriter, vaudeville star, and film producer. If you’re a Baby Boomer, you may know him as the “Toastmaster General of the United States,” due to his numerous gigs as master of ceremonies at political and entertainment events. Jessel originated the role of The Jazz Singer on the stage.

Tyrone Power (1914 – 1958) was a major movie star as well as a star on stage and radio. He was one of the biggest box office draws of the 1930s and 1940s. Power was under exclusive contract to 20th Century-Fox where his image and film choices were carefully selected by studio head Zanuck. After the war, Power wanted to stretch his acting past romantic comedies and swashbuckler roles. Nightmare Alley was Power’s personal favorite of all his films.

Colleen Gray (1922 – 2015) was an American actress who was under contract to 20th Century-Fox in the 1940s. She was in another famous film noir, Kiss of Death (1947) with Victor Mature and Richard Widmark. She also had a role in Red River (1948) with John Wayne. In the 1950s she started working in television, guest-starring in many popular shows of that period.

Helen Walker (1920 – 1968) was a film actress during the 1940s and 1950s. After a quick start in Hollywood, working with stars like Alan Ladd and Fred MacMurray, a car accident resulting in the death of hitchhiker, stunted her career.

Below is a link to the film on YouTube. Be sure to follow this link because it’s the best print out there. There are many versions of Nightmare Alley on YouTube that are inferior and of poor quality. You want to view the best possible version of this film.

Join us for a discussion on May 26 at 6:30 p.m. Central Time. Zoom meeting links below.

Posted by Stephen Reginald at 2:54 PM