Barbara Stanwyck and Wendell Corey in “The File on Thelma Jordon”

The File on Thelma Jordon (1950) is a film noir directed by Robert Siodmak, produced by Hal B. Wallis, and starring Barbara Stanwyck and Wendell Corey. 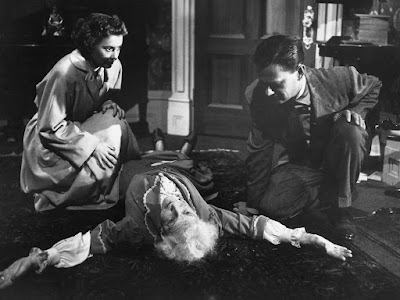 Not long afterward, Thelma’s aunt is murdered in what appears to be a burglary attempt. Thelma becomes the main suspect which puts Cleve in a bind when he is called upon to prosecute her. Will Thelma be proved innocent? Will she and Cleve be able to make a new life together?

The film premiered in New York on January 18, 1950. It was a box office hit and received generally good reviews. The New York Times praised Stanwyck for “handling a complex assignment professionally and with a minimum of forced histrionics.” If you know anything about the critics in the Times during that period, that was a rave review!


Robert Siodmak (1900 – 1973) had a very successful career in Hollywood and is best known for his thrillers and films noir. He signed a seven-year contract with Universal and directed The Killers (1946), the film that made Ava Gardner a star. He worked with some of the top movie stars during Hollywood’s Golden Age, including Deanna Durbin, Gene Kelly, Burt Lancaster, Dorothy McGuire, Yvonne de Carlo, Olivia de Havilland, and Barbara Stanwyck. Often compared to Hitchcock in his prime, he never got the recognition that the Master of Suspense did, but most of his films hold up remarkably well and are worth watching.

George Barnes (1892 – 1953) was an Academy Award-winning cinematographer (Rebecca 1940) whose career goes back to the silent era. He was married to actress Joan Blondell (1933-1936) and filmed five of her pictures at Warner Brothers. He worked with all the top directors from Hollywood’s Golden Age including Victor Fleming, Busby Berkeley, Alfred Hitchcock, Frank Capra, and Cecil B. DeMille.

Barbara Stanwyck (1907 – 1990) was an American film star who got her acting start with a supporting role on Broadway in a play called The Noose (1926). The next year she had the lead in another Broadway production, Burlesque which was a huge hit. She eventually made it to Hollywood where her success was not immediate. Director Frank Capra saw something in Stanwyck and he educated her in filmmaking and film acting and the rest is history. Stanwyck was nominated four times for the Best Actress Oscar—Stella Dallas (1937), Ball of Fire (1941), Double Indemnity (1945), Sorry, Wrong Number (1948)—and remains one of the most beloved movie stars from Hollywood’s Golden Age.

Wendell Corey (1914 – 1968) was an American film and stage actor. After appearing in the hit Broadway play Dream Girl (1945), Corey was spotted by producer Wallis who put him under contract at Paramount. He started out in supporting roles, but he was elevated to leading man with The File on Thelma Jordon. As film roles diminished, Corey turned to television where he made guest appearances on Alfred Hitchcock Presents, The Untouchables, Perry Mason, and The Wild Wild West.

Here’s the link to the film. Be sure you use this link. There are many prints of this film on YouTube, but this print (you see the “Olive Films” logo) is superior in every way.


Join us for a discussion on this film on May 19 at 6:30 p.m. Central Time. Zoom meeting links below.

Questions for discussion:
1. Noir or not? Based on your understanding of the genre, do you consider this a film noir?
2. What did you think of the performances? This is basically Stanwyck’s and Corey’s picture; how did they do?
3. Was Stanwyck a “classic” femme fatale?
4. Did this film remind you of any other films you’ve seen?
5. Were you surprised by the ending or did it seem logical, all things considered?

Posted by Stephen Reginald at 11:16 AM