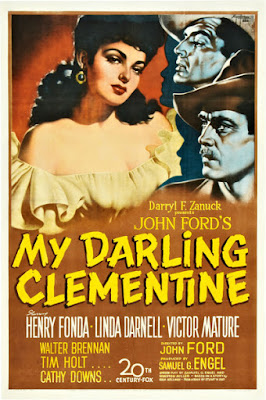 My Darling Clementine (1946) is an American western film directed by John Ford, starring Henry Fonda, Linda Darnell, and Victor Mature. Many critics consider it one of the best westerns ever made.

The movie takes place in 1882, with the Earp brothers Wyatt (Fonda), Morgan (Ward Bond), Virgil (Tim Holt), and James (Don Garner) on a cattle drive to California. On the way, they meet Old Man Clanton (Walter Brennan). Clanton wants to buy the Wyatt cattle, but they refuse to sell. When they learn of the nearby town of Tombstone, the three older brothers ride in, leaving their younger brother James to watch over the herd. When Wyatt, Morgan, and Virgil return to camp, they discover that their cattle have been rustled and James has been murdered.

This is the setup for the famous gunfight at the O.K. Corral.

Some Clementine Trivia
My Darling Clementine was Fonda’s first film role upon returning from service in World War II. Mature had one of his best roles as Doc Holiday, even winning praise from director Ford, which was no easy task. Darnell who was emerging as 20th Century-Fox’s top bombshell is the fiery Chihuahua. Jeanne Crain was originally considered for the role of Clementine Carter, but studio head Darryl F. Zanuck had bigger plans for her. He thought the supporting role was too small for Crain who was being groomed for major stardom. Brennan disliked Ford so much that he never work with him again. Jane Darwell who plays dance hall owner Kate Nelson won a Best Supporting Actress Oscar in Ford’s The Grapes of Wrath (1940) which starred Fonda as Tom Joad.


John Ford (1894 – 1946) was an American film director. Best known for his classic westerns. Ironically he won four Best Director Oscars for non-western films, a record that has yet to be equaled. Ford directed more than 140 films going back to the silent era. Orson Welles and Ingmar Bergman are among the many who consider Ford the greatest director of all time.

Henry Fonda (1905 - 1982) was an American stage and film actor. Fonda became a star in his first film role as Dan Harrow in The Farmer Takes a Wife (1935) co-starring established star Janet Gaynor. In 1938, he co-starred in Jezebel with Bette Davis. In 1939 he starred as Frank James along with Tyrone Power in Jesse James (the second biggest hit of the year), Young Mr. Lincoln, and Drums Along the Mohawk, the latter two directed by John Ford. Fonda worked steadily on the stage and on film until a year before his death. He won his one and only Oscar for On Golden Pond (1981).

Linda Darnell (1923 – 1965) was an American film actress. She signed a contract with 20th Century-Fox at age 15 and became a star almost overnight. She was immediately cast opposite Tyrone Power in Day-Time Wife (1939). She made two films with Power in 1940: Brigham Young and The Mark of Zorro. In 1941, she was again paired with Power in Blood and Sand, which also starred an up and coming Rita Hayworth. Darnell’s most famous role was that of Amber St. Clair in Forever Amber (1947), which turned out the be the biggest hit of the year. The role of Amber was the most sought after female role since the casting of Scarlett O’Hara in Gone with the Wind (1939). Other important films she starred in include Unfaithfully Yours (1948), A Letter to Three Wives (1949), and No Way Out (1950). She died tragically at age 41 in a fire while visiting friends in Glenview, Illinois.

Victor Mature (1913 – 1999) was an American stage, film, and television who became a major movie star during the 1940s under contract to 20th Century-Fox. Before his film career took off, Mature starred in Lady in the Dark (1941) on Broadway opposite Gertrude Lawrence. Some of Mature’s notable films include I Wake Up Screaming (1941) with Betty Grable, The Shanghai Gesture (1941) with Gene Tierney. In 1942, he starred opposite Rita Hayworth in the musical My Gal Sal. Other notable films include Kiss of Death (1947), Samson and Delilah (1949), and The Robe (1952), the first film released in the Cinemascope widescreen process.


To watch this film on YouTube, click on the link below. Be sure to use this link because there are several prints of this film on the channel, but this one is the best by far.

After you’ve watched the film, join us for a discussion on Zoom, July 21, 2020. Click on the link below to join the discussion.


Discussion questions:
1. This film is considered one of the great American westerns. How does it rate in your estimation?
2. Henry Fonda was Ford’s first and only choice to play Wyatt Earp. What did you think of Fonda’s performance? Can you see another actor in the role?
3. John Ford was at first unhappy about the casting of Victor Mature (he had wanted James Stewart), but after interviewing the actor, he was convinced he was right for the part. What do you think?
4. Many critics think that Linda Darnell was miscast as Chihuahua. Do you agree with the critics and why or why not?

Posted by Stephen Reginald at 8:57 PM