Young Mr. Lincoln (1939) is an American biographical film directed by John Ford and starring Henry Fonda. It was produced by 20th Century-Fox studio head Darryl F. Zanuck and Kenneth Macgowan. The film was photographed by long-time Ford cinematographer Bert Glennon. The supporting cast includes Alice Brady (My Man Godfrey), Marjorie Weaver, Donald Meek (Stagecoach), Ward Bond, and Milburn Stone (Gunsmoke). The screenplay was written by Lamar Totti; he received an Academy Award nomination for Best Original screenplay.
The film takes place in 1832 and is a fictionalization of the early career of Abraham Lincoln during his days in New Salem, Illinois. During Independence Day festivities, a man named Skrub White (Fed Kohler Jr.) has a scuffle with two brothers, Matt and Adam Clay (Richard Cromwell and Eddie Quillan). When White pulls a gun on the brothers, he is stabbed and killed. Neither brother will accuse the other and both are put on trial for murder. Lincoln defends the brothers matching wits with the experienced prosecutor John Felder (Meek).
The case against the brothers rests with the eye-witness testimony of John Palmer Cass. Will Lincoln be able to challenge his testimony? Will the brothers be hanged for murder?
Young Mr. Lincoln trivia:
To watch the movie on YouTube click the link below.
Why watch this film? 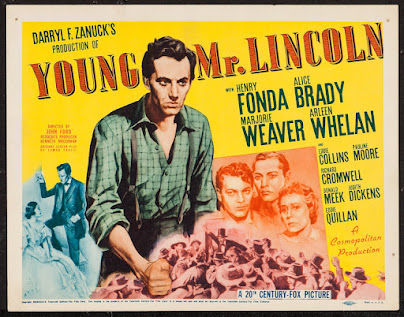 Questions for discussion:
To join on on Zoom for a discussion of this film on August 2, 2021, 6:30 p.m. Central Time, click here.
Once you RSVP, you’ll receive an invitation and links to the discussion on Zoom.
Posted by Stephen Reginald at 2:29 PM