Three Secrets (1950) is an American drama directed by Robert Wise and starring Eleanor Parker, Patricia Neal, and Ruth Roman. The supporting cast includes Frank Lovejoy, Leif Erickson, and Ted de Corsia.
Three women (Parker, Neal, and Roman) gave up a son for adoption when their lives were in turmoil. After a private plane crashes in the California mountains the sole survivor is a five-year-old boy. All three women believe that the boy on the mountain may be the son they gave up for adoption.
As the drama on the mountain becomes a national story, all three women recall what their lives were like five years ago. How will the news of their past affect their present and future?
Robert Wise (1914 - 2000) was an American director, producer, and editor. Wise began his movie career at RKO as a sound and music editor. For several years, he worked with senior editor William Hamilton. Wise’s first solo film editing credits were on Bachelor Mother (1939) and My Favorite Wife (1940). He was the film editor of Citizen Kane and was nominated for an Academy Award for Film Editing. Wise got his chance to direct at RKO from Val Lewton, the producer of horror classics like Cat People (1942). The Curse of the Cat People (1944) was the first film that Wise received director credit for. He eventually directed films noir, westerns, melodramas, and science fiction. Some popular films directed by Wise include The Day the Earth Stood Still (1951), Executive Suite (1954), and I Want to Live! (1958), which earned Wise his first Oscar nomination for Best Director. He went on to win Best Director Oscars for West Side Story (1961) and The Sound of Music (1965). 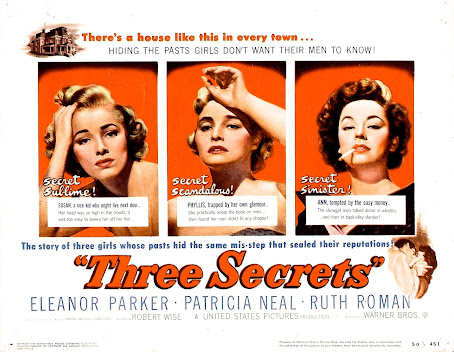 Eleanor Parker (1922 - 2013) was an American actress in film and a three-time Best Actress Academy Award nominee. She signed a long-term contract with Warner Bros. in 1941. For the next few years she played minor roles in some important films, but her first big role came in Between Two Worlds (1944) opposite John Garfield and Paul Henreid. She was again cast alongside Garfield in Pride of the Marines (1945) and that film made her a star. Some of the films she made after that were not as successful and Parker was more careful choosing film roles, often refusing parts and being put on suspension. Warners cast her (after much lobbying from Parker) in Caged (1950), a film about a woman’s prison. The film was a hit and her performance earned Parker her first Best Actress Academy Award nomination. For her performance, she won the Volpi Cup for Best Actress at the Venice Film Festival. After leaving Warners, Parker freelanced for a while with limited success. In 1953, she signed a long-term contract with M-G-M. At her new studio, she co-starred with Clark Gable, Robert Taylor (they made three films together), and Glenn Ford. One of her most celebrated roles was as opera singer Marjorie Lawrence in Interrupted Melody (1955) which earned her third Oscar nomination. In the mid-50s, Parker was one of the most popular female stars in the movies. With all her accomplishments during her prime, she will most likely be remembered for her role as Baroness Elsa Schraeder in The Sound of Music (1965), one of the most popular and successful films of all time.
Patricia Neal (1926 - 2010) was an American film and stage actress. Neal gained fame on Broadway, winning the 1947 Tony Award for Best Featured Actress in a Play for her role in Another Part of the Forrest. Coincidentally, 1947 was the first year the Tony Awards were presented. Hollywood came calling and Neal signed a contract with Warner Bros. In 1949, she made three films including The Fountainhead co-starring Gary Cooper. In 1951 she starred in the science fiction classic The Day the Earth Stood Still. In the early 1950s, she left Hollywood to go back on the stage. She returned to the screen in 1957's A Face in the Crowd co-starring Andy Griffith. She co-starred with Audrey Hepburn and George Peppard in Breakfast at Tiffany's and she won the Academy Award for Best Actress in 1963 for Hud. Neal continued to act in film, stage, and television until 2009.
Ruth Roman (1922 – 1989) was an American film, stage, and television actress. Roman got her start in the movies starring in the Jungle Queen (1945) film serial. She had a notable role in The Window (1949) which lead to her being cast in Champion (1949) co-starring Kirk Douglas. These successes earned her a contract with Warner Bros. During her years under contract, she co-starred with some of Hollywood’s top leading men including Gary Cooper, Errol Flynn, Glenn Ford, and James Stewart. Roman also worked steadily on television during the 1950s and beyond, appearing on such popular shows as Mannix, Marcus Welby, M.D., The Mod Squad, The FBI, and The Outer Limits.
To watch the film on YouTube, click the link below.
To join the discussion on October 10, 202, at 6:30 p.m. Central Time, click here. Once you RSVP, you will receive an invitation and link to join the discussion on Zoom.
Discussion questions
Posted by Stephen Reginald at 4:44 PM