This was director Otto Preminger’s follow-up to Laura released the year before. The cinematography was by Joseph LaShalle, who won an Academy Award for his work on Laura. Also on board for Fallen Angel was David Raksin, who wrote the film score. He composed the music for Laura, one of the most famous film scores in movie history. Last, but not least, Andrews who played Mark McPherson opposite Gene Tierney in Laura, has the male lead in Fallen Angel. Andrews made five films with Preminger, more than any other leading man.

Faye, the musical queen on the Fox lot, was looking to move into dramatic roles. She loved Laura and wanted to star in a similar mystery. As already noted, she got a lot of the same talent that was involved with that film noir classic. When Faye saw the finished film, she felt that the movie emphasized Darnell’s role to the detriment of her own. She was so distressed that she walked out on her contract. Studio boss Darryl Zanuck begged her to come back, promising her roles in prestige films in the planning stages like The Razor’s Edge, but Faye was done. She didn’t return to the big screen until 1962’s State Fair.

Darnell was signed to a contract at 20th Century Fox at age 15. Because she looked older than her age, she worked as a leading lady from the outset, with the studio claiming she was 19. Her role in Fallen Angel helped turn her into a popular pin-up during World War II. In 1944, Look magazine named her one of the four most beautiful women in Hollywood, along with Hedy Lamarr, Ingrid Bergman, and Fox colleague, Gene Tierney.


For a complete schedule of films and information on PianoForte, click the link here.
Posted by Stephen Reginald at 2:18 PM No comments: Links to this post

Directed by Joseph H. Lewis, with a screenplay by Dalton Trumbo (credited as MacKinlay Kantor), Gun Crazy is about husband and wife outlaws. After a stink in reform school and then the Army, Bart Tare (Dall) is smitten with Annie Laurie Starr (Cummings), a sharpshooter at a traveling carnival show. Bart challenges Annie to a shooting contest, wins and begins a tempestuous relationship that leads to marriage and a life of crime.


The film is noted for its innovative camera work and improvisational script. Gun Crazy is credited with influencing director Arthur Penn’s Bonnie and Clyde some 17 years later.

In 1998, Gun Crazy was selected for preservation in the United States National Film Registry by the Library of Congress as being “culturally, historically, or aesthetically significant.”

Posted by Stephen Reginald at 8:30 AM No comments: Links to this post

The new season of the Chicago Film Club will begin on January 10 at a new venue. The new venue is PianoForte at 1335 S. Michigan Ave. 2nd Floor. We’re excited to be in this new space, which will make classic movie watching more enjoyable.

If you love classic movies, this is the club for you. You’ll have fun learning about the classical Hollywood period of filmmaking as well as interacting with other classic movie fans. Each movie will be introduced, providing important background information to make the movie watching experience as enjoyable as possible. Q & A and discussion time after each film viewing will give everyone a chance to contribute their impressions and opinions. It will be like going to film school, but with no tests, quizzes, or finals!

Forgotten Film Noir
Some of the films screened will feature films noirs that have been “forgotten” or passed over by some of the more iconic or famous films from the genre, but are every bit as enjoyable. 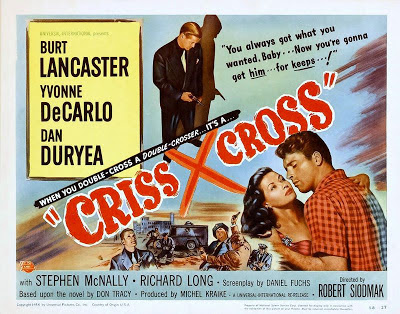 Criss Cross (1948) will launch the series. This exciting film noir stars Burt Lancaster (The Killers 1946) and Yvonne DeCarlo, most famous today for playing Lily Munster on the 1960s television comedy The Munsters. DeCarlo had a significant career in film and her role as Anna shows just how versatile an actor she was. Also starring is Dan Duryea, one of the movies most popular character actors. Duryea often portrayed crooks and bad guys and his role as mobster Slim Dundee is no exception.

The film was directed by Robert Siodmak (The Spiral Staircase 1946) who directed Lancaster in his breakout performance in The Killers. Siodmak was a German film director who immigrated to the United States, along with his younger brother Curt who was a prominent screenwriter at Universal Studios. Robert was a studio director at Universal. He is credited with discovering Lancaster, Ernest Borgnine, Tony Curtis, and Debra Paget. Siodmak directed some of the most popular films of the 1940s.

Chicago Film Club Full Schedule
Save these dates. The full movie list is below; mark these dates on your calendar!*

To stay on top of all the Chicago Film Club screenings, join us on Meet Up (it’s free to join). Besides these screenings, we’ll inform you of other classic movie events happening in Chicago.

Dates subject to change. Be sure to check this blog and the Meetup site for the latest information and updates.

Posted by Stephen Reginald at 4:46 PM No comments: Links to this post

Posted by Stephen Reginald at 12:00 AM No comments: Links to this post

It’s Christmastime again and here we are with another selection of Classic Christmas movies. For me a Christmas movie is any movie that has some of its focus during the holiday season. There are many movies that take place entirely during Christmas and many others that have short, but important scenes set during the holiday. Here is a new crop of classics for you to consider this year.

All That Heaven Allows—1955 This classic directed by Douglas Sirk centers around the relationship between widow Cary Scott (Jane Wyman) and the younger gardener Ron Kirby (Rock Hudson) that she falls in love with. Set in a New England town, their romance becomes the source of gossip and condemnation from Cary’s friends and the general population of Stoningham. Probably no one disapproves of their relationship more than Cary’s adult children who think that she should sit around at home watching television. The idea that their mother should have any chance at a second romance is shocking and embarrassing to them. Shot in gorgeous Technicolor, All That Heaven Allows is quintessential Sirk at the height of his powers.


Backstory: This was a follow-up to Wyman’s and Hudson’s successful pairing in Magnificent Obsession released the year before. All That Heaven Allows opened in Los Angeles on Christmas Day, 1955.

Auntie Mame—1958 Rosalind Russell made an indelible impression on moviegoers when this film was released. The character of Mame had been the subject of a novel and play (eventually it would become a musical). Mame is one of those larger-than-life-characters that in spite of their eccentricities and odd behavior you just can’t help but love. Mame’s life has its ups and downs and during the Christmas season she experiences some hard times after the 1929 Stock Market crash. 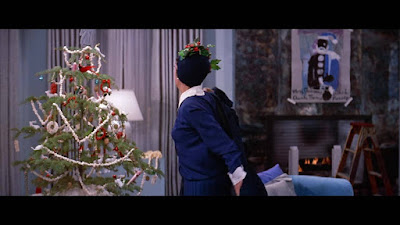 Backstory: Rosalind Russell recreated the role she originated on Broadway and was nominated for Best Actress of 1959. The film was nominated for another five Academy Awards; it lost in all categories. The movie opened December 27, 1958.

A Summer Place—1959 How could a movie with that title have anything to do with Christmas? This 1950s melodrama directed by Delmer Daves was one of the biggest hits of the year when first released. The theme from the movie is one of the most recognizable pieces of music from the mid-twentieth century. The plot focuses on two former lovers now married to different people who are reunited during one summer. The complicated relationship affects both families, pitting parents against children. There’s a critical scene at Christmas where Helen Jorgensen (Constance Ford) confronts her daughter Molly (Sandra Dee) about her relationship with Johnny Hunter (Troy Donahue) just days before Christmas. It doesn’t end well for Molly and one sad Christmas tree.


Backstory: The musical theme from the film was Number One on the Billboard chart for nine consecutive weeks.

The Lion in Winter—1968 This complicated family drama—you think your family is dysfunctional—takes place at Christmas in 1183 in the medieval Angevin Empire. The film stars Peter O’Toole as King Henry II and Katharine Hepburn as Eleanor of Acquitane his estranged wife and Queen. The plot revolves around the king and queen fighting over which of their sons deserves to follow Henry on the throne. You’ll need an extra blanket and some hot cocoa to watch this movie because it’s one of the coldest Christmas movies you’ll ever watch, but an enjoyable watch it is nonetheless.

Backstory: The original stage production of The Lion in Winter was a major flop. Hepburn won her third Best Actress Oscar and the film marked the debuts of future stars Anthony Hopkins and Timothy Dalton.

Check out past Christmas favorites by clicking on the links below.

Posted by Stephen Reginald at 7:55 PM No comments: Links to this post

Posted by Stephen Reginald at 2:00 AM No comments: Links to this post

Doris Day gets her due at The Music Box Theatre

For several weekends now, The Music Box Theatre, 3733 N. Southport Ave., Chicago, has been screening classic Doris Day movies. The series is titled “The Inimitable Doris Day” and the films have been screened, for the most part on Saturday mornings at 11:30 a.m. 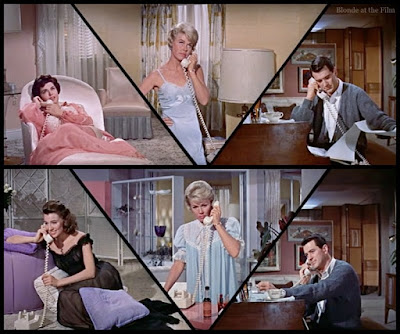 Saturday, November 2, they’ll be screening one of Day’s most famous roles as Jan Morrow in Pillow Talk (1959). The film costarring Rock Hudson, was a tremendous box office hit, earning Day her only Academy Award Best Actress nomination. The picture did wonders for both Day and Hudson’s careers and they made two more successful comedies together: Lover Come Back (1961) and Send Me No Flowers (1964). The film also stars Tony Randall and Thelma Ritter. Randall also costars in Lover Come Back and Send Me No Flowers.

Pillow Talk demonstrates Day’s ability to tackle any movie genre with ease. She’s a natural comic actress and she’s a knockout in the clothes designed for her by Jean Louis.

Lover Come Back will be screened on November 23 and 24 at 11:30 a.m. For more details, please visit the Music Box Web site.

Posted by Stephen Reginald at 4:26 PM No comments: Links to this post