Sometimes history isn’t always fair. For example, there are movie directors and actors, who in their day, were enormously famous and successful, but for whatever reasons are almost forgotten today.

Paramount Director
Such is the case with Mitchell Leisen (1898-1972), a top director during Hollywood’s golden age. As a contract director at Paramount, he worked with all the top stars during that period: Carole Lombard, Claudette Colbert, Fred MacMurray, Jack Benny, Fredric March, Ray Milland, Marlene Dietrich, and Barbara Stanwyck.

Early Commercial Success
Best known for his elegant romantic comedies, Leisen also excelled at action and melodramatic films. Leisen got his start as an art director and costume designer. Working under famed director Cecil B. DeMille, Leisen received his one and only Academy Award nomination for his art direction of Dynamite in 1930.  He eventually worked his way up the ladder, directing his first film, Cradle Song, in 1933. The next year, Leisen directed two popular films Death Takes a Holiday

and Murder at the Vanities

. In 1935, he knocked one out of the park with Hands Across the Table. This landmark romantic comedy made Carole Lombard a superstar and established Fred MacMurray as a top leading man. During the rest of the 1930s, Leisen made some of the most commercial films at Paramount, including Swing High, Swing Low

which was the studio’s biggest moneymaker in 1937. That same year, he directed the classic Easy Living

starring Jean Arthur. Leisen topped off the decade with the delightful Midnight

starring Claudette Colbert and Don Ameche. This romantic comedy, one of the many great films released in 1939, unfortunately does not have the status of some of its less-worthy, but better-known contemporaries.

The Fabulous Forties
During the next decade, Leisen produced more winners for Paramount. In 1940, he directed the classic Remember the Night

starring Stanwyck and MacMurray. The sensitive Hold Back the Dawn (1941) provided Olivia de Haviland with one of her best film roles up to that time. Leisen’s masterful direction helped de Haviland receive her first Best Actress Academy Award nomination. Later in the decade, he would direct de Haviland in her Oscar-winning performance for To Each His Own (1946). In 1944, Leisen was trusted with directing two big-budget Technicolor productions: Lady in the Dark starring Ginger Rodgers and Frenchman’s Creek starring Joan Fontaine. Both films were huge commercial successes and both focused on the talent and beauty of the female leads. As Dona St. Columb, Joan Fontaine never looked more beautiful. In 1945 Leisen directed Paulette Goddard to one of her biggest commercial and critical successes in Kitty. After seeing Goddard in that film, French film director, Jean Renoir decided to cast her as the lead in Diary of a Chambermaid 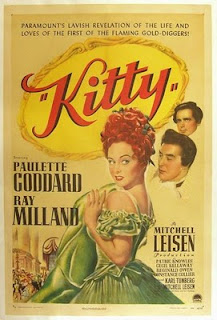 Paramount's George Cukor
Leisen, like George Cukor, at MGM, had a reputation for his direction of women. A generation of leading ladies at Paramount owe Leisen a great debt. Many did their best work under his direction. For others, he crafted popular vehicles ideally tailored to their personalities.

TV Director
His success as a director continued into the early 1950s. Leisen’s last popular success was The Mating Season (1952) starring Gene Tierney, John Lund, and the Oscar-nominated Thelma Ritter. After The Girl Most Likely

in 1958, with movie projects nonexistent, Leisen turned his attention to television, directing episodes of popular shows like the Twilight Zone, Wagon Train, and The Girl from U.N.C.L.E.

Of all the directors to come out of the studio system, Mitchell Leisen was one of the best. And one day, I hope, he’ll receive the recognition and honor he deserves.
Posted by Stephen Reginald at 5:57 PM