My Man Godfrey this Friday 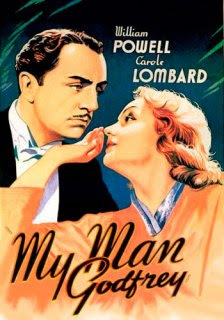 The Prairie District Neighborhood Alliance (PDNA) invites you to "Meet Me at the Movies," Friday September 24, 2010 at 6:30 p.m. at Sherwood Community Music School, Columbia College recital hall, 1312 S. Michigan Ave. The wrap party (dinner after movie) will be held at the Weather Mark Tavern 1503 S. Michigan Ave.
Classic performances and situations have made My Man Godfrey

one of the best film comedies ever made. My Man Godfrey was the first film to receive Academy Award nominations in all four major categories, including Best Actor and Best Actress for William Powell

respectively. Film critic Roger Ebert in a review of the movie simply said, “God, but this film is beautiful” and it truly is. My Man Godfrey is ranked 44 in the American Film Institute’s (AFI) “America’s 100 Funniest Movies” compiled in 2002. Not bad for a movie first released in 1936.
Lombard was so identified with the screwball comedy genre that Life magazine dubbed her “the screwball girl” in a 1938 cover story. When paired with Powell, no stranger to comedy himself, My Man Godfrey becomes a master class of screwball comedy technique.
Admission to the movie is $5. Dinner afterward (not required) is $15 per person. To RSVP to this event and/or the wrap party click here.

Posted by Stephen Reginald at 1:39 PM