Last year I put together a short list of Christmas movie favorites (see Classic Movie Man’s Favorite Christmas Movies). So I decided to put together another list for 2011. This year’s list includes some movies that you may not identify as Christmas movies, but they all include pivotal climatic holiday scenes and often show up during this time of year. The movies are listed below in order of their respective release dates. 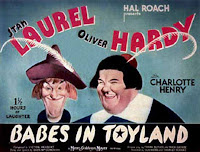 Babes in Toyland—1934 This Laurel and Hardy classic also known as March of the Wooden Soldiers, was a favorite of mine as a kid. The “boys” are at their comic best in this interpretation of the Victor Herbert operetta. All the Mother Goose characters are here, including Bo-Peep, Tom-Tom, The Old Lady Who Lived in a Shoe, and Mother Goose herself. Santa Claus makes an appearance, checking up on an order with the toy maker. Due to a misunderstanding the soldiers Santa ordered were mistakenly made life-size and too big for children to play with, which forces the jolly old man to cancel his order. But it’s these giant toy soldiers that save the day at the end. 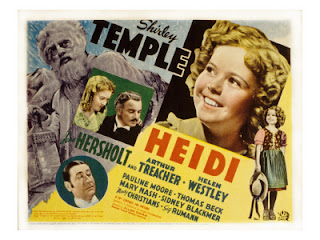 Heidi—1937 This Shirley Temple classic includes a climatic scene toward the end of the film that takes place during Christmas. Loosely based on the Swiss literature classic by Johanna Spyri, Heidi was originally released on October 15, 1937. One of Temple’s best and most popular films, it has a wonderful message about redemptive love and reconciliation. Jean Hersholt’s characterization as The Grandfather is perfect. He makes the transition from a gruff and bitter man into Heidi’s kind and gentle protector most touching. The film also includes Temple movie mainstays Mary Nash as the evil Fräulein Rottenmeier, Marcia Mae Joes as Klara, and Arthur Treacher as Andrews, the butler, of course.

The Shop Around The Corner—1940 Legendary film director Ernst Lubitsch’s classic stars Margaret Sullivan and James Stewart as battling coworkers in a Budapest shop. They fall in love when they start corresponding through letters, after answering ads in the newspaper’s lonelyhearts section. Of course Sullivan and Stewart don’t know the true identities of their loves, which makes for some wonderful situations. Never mind that everyone in Budapest sounds like they’re from California, this movie has a warmth and charm that neither remakes, In The Good Old Summertime and You’ve Got Mail, came even close to capturing. For good measure we have the irrepressible Frank Morgan as shopkeeper Mr. Matuschek.

Remember the Night—1940 Tough girl Barbara Stanwyck gets caught shoplifting a bracelet during the Christmas holiday season and is arrested. Fred MacMurray, the prosecuting attorney, postpones the trial until after Christmas and bails Stanwyck out, rather than have her spend the holiday in jail. MacMurray then volunteers to drive Stanwyck to her mother’s house. When Stanwyck’s mother gives her the cold shoulder, MacMurray brings her to his mother’s home to spend the holiday, where she is warmly received. A wonderful romantic melodrama, Remember the Night was written by Preston Sturges (The Lady Eve) and directed by the underrated Mitchell Leisen (Hands Across the Table). An edearing film that demonstrates the power of love and its ability to redeem and transform.

Meet John Doe—1941 This lesser-known Frank Capra classic stars Barbara Stanwyck as Ann Mitchell a crafty newspaper columnist who creates an everyman character, John Doe. Doe pledges to jump off of the roof of city hall on Christmas Eve, to protest all the injustice in the world. Gary Cooper plays John Doe, handpicked by Mitchell to perpetuate her newspaper column and her job. The column, and the sentiment expressed in it is such a hit with the public that John Doe clubs start forming, making Doe a national figure. Double-crossed by a corrupt newspaper tycoon (Edward Arnold), Doe is disgraced and makes his way to the roof of city hall on Christmas Eve. Will he jump? You’ll have to find out for yourself. Cooper and Stanwyck had a great 1941. They costarred again in the Howard Hawks classic Ball of Fire and Stanwyck starred in the Preston Sturges classic, The Lady Eve. Cooper won the first of his two Oscars for Sergent York. Available in a 70th Anniversary two-disc DVD, Meet John Doe never looked better. 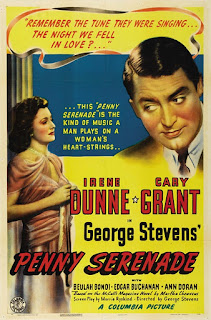 Penny Serenade—1941 The third and last pairing of screen legends Irene Dunne and Cary Grant is a tear-jerking melodrama, which was a change of pace from the rollicking comedies they made together in 1937 and 1940. The movie told in flashback, begins with Julie Adams (Dunne)  packing up her belongings, in preparation to leave her husband, while listening to old recordings on the phonograph. With each familiar tune, she thinks back to the early years of her marriage and happier times. After it is revealed that Julie cannot have children, she and her husband Roger (Grant) adopt a little girl. Tragedy strikes right before Christmas and it tears the couple apart. Directed by Academy Award winner George Stevens, the movie still packs an emotional punch. Grant’s performance earned him his first Best Actor Academy Award nomination. The film also costars the great character actors Beulah Bondi (wonderful as a sympathetic social worker) and Edgar Buchanan. If you’re not crying by the end of this film, you’re dead!

Holiday Inn—1942 Another favorite from my childhood, the movie revolves around friends and entertainers Jim Hardy (Bing Crosby) and Ted Hanover (Fred Astaire) and their professional and romantic entanglements. After Jim’s girlfriend Lila Dixon (Virginia Dale) throws him over for Ted, Jim decides to retire to a Connecticut inn open only during public holidays. Jim hires Linda Mason (Marjorie Reynolds) to work as an entertainer at the inn and a romance quickly develops. This is the movie that launched the song “White Christmas,” which became the biggest selling Christmas song of all time. This film isn’t shown on TCM because it contains a minstrel number, “Abraham” where Crosby and Reynolds appear in blackface. It’s uncomfortable to watch today, but it’s a unfortunate part of our history. The future holiday classic, White Christmas (1954) was a loose remake of this film. 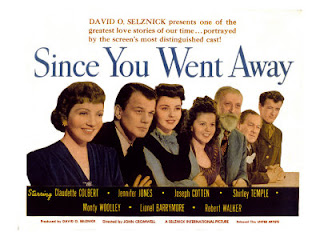 Since You Went Away—1944 Another film not necessarily associated with Christmas, this war-time classic boast an all-star cast featuring Claudette Colbert, Jennifer Jones, Joseph Cotton, Shirley Temple, Lionel Barrymore, Montey Wooley, Robert Walker, and Hattie McDaniel. The film begins in early January and ends in late December 1943. Concentrating on the Hilton family as they keep the home fires burning while its matriarch’s (Colbert) husband is fighting overseas. The film is at times sentimental, but at others is brutally honest about the emotional toll of war, separation, and loneliness. The film has a very moving scene between Ann Hilton (Colbert) and fellow factory worker Zofia Koslowska, a Europen émigré, played by silent-screen legend Alla Nazimova. Zofia details her emigration to the United States and how in spite of the tragedy of war, her life is still so much better than it was in the war-torn land of her birth. The film ends on an inspirational note during Christmas to encourage wartime moviegoers, but the message of courage and hope still resonates—maybe even more so—today. 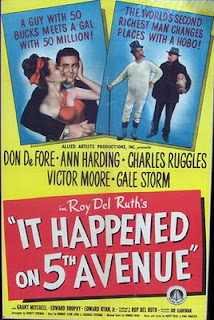 It Happened On 5th Avenue—1947 This minor classic hasn’t benefited from annual showings on TV to build its reputation, but it is an interesting and engaging film. Frank Capra had intended to film this story, but decided he couldn’t make two movies centered around Christmas in the same year, so he opted to make just one, It’s A Wonderful Life. It Happened On 5th Avenue is about a hobo named Aloyisius T. McKeever (Victor Moore) who lives in a boarded up Manhattan mansion during the winter while the owner, Michael J. O’Connor (Charles Ruggles), the second richest man in the world, moves down south for the season. McKeever meets a homeless World War II veteran, Jim Bullock (Don DeFore), recently kicked out of his apartment. Aloyisius feels sorry for Jim and decides to take him “home.” O’Connor’s daughter, Trudy (Gale Storm) unhappy at finishing school, runs away and returns to the boarded up New York City mansion. Both Aloyisius and Jim think she’s a crook out to steal a mink coat. Not wanting to get her father involved and possibly sent back to school, Trudy confesses to being a girl down on her luck and in need of some nice clothes for a job interview. The three become fast friends and decide to invite two homeless families with children to live with them. Before you know it, Trudy’s mother, Mary O’Connor (Ann Harding) is living in the mansion too, disguised as a cook, along with her estranged husband, Michael, now pretending to be another hobo. The plot is incredible, but the cast of pros make it all work somehow. Don Defore and Gale Storm would go on to TV immortality as Mr. Baxter in Hazel and Margie Albright in My Little Margie respectively. 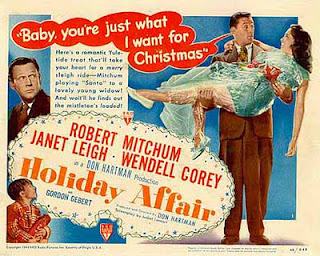 Holiday Affair—1949 Not a big hit when first released, it’s become something of a classic today, due in part to the curiosity surrounding the change-of-pace role for tough-guy Robert Mitchum and repeated showings on TCM. Fresh-faced Janet Leigh costars as war widow, Connie Ennis, with a young son (Gordon Gebert) to support. Connie, a comparative shopper, buys an electric train set from salesman and army veteran, Steve Mason (Mitchum). Connie returns it the next day for a refund, which results in Steve being fired. Connie’s long-term relationship with lawyer Carl Davis (Wendell Corey) is complicated when she finds herself attracted to Steve. Similar to Miracle on 34th Street in some ways, the film benefits from the good chemistry between Leigh and Gebert as mother and son.

Of course there are more Christmas movies, but that’s what the 2012 list is for! Please feel free to share you favorites here and Merry Christmas!

Email ThisBlogThis!Share to TwitterShare to FacebookShare to Pinterest
Labels: Babes in Toyland, Classic Movie Man, Heidi, Holiday Inn, It Happened on 5th Avenue, Meet John Doe, Penny Serenade, Remember the Night, Since You Went Away, The Shop Around The Corner