“Singing in the Rain” 60th Anniversary Screening August 22, 2012 one night only 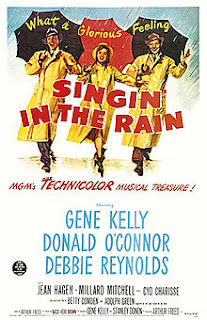 Turner Classic Movies and Warner Brothers are presenting special screenings of the classic musical Singing in the Rain (1952) on August 22, 2012 at theaters around the country and here in Chicago. The film has been digitally restored promising to look as good as new. Before the movie screening, TCM will present a short documentary on the film that includes an interview with star Debbie Reynolds. In the documentary she talks about what is was like working alongside Gene Kelly and Donald O’Connor.

Produced by the legendary Arthur Freed at M-G-M when that studio was producing some of the best movie musicals every made, including Meet Me in St. Louis (1944) and An American in Paris (1951). For those who don’t know the plot, it takes place during the time movie studios were making the transition from silent to talking films. If you saw The Artist, 2012’s Academy Award winner for Best Picture, you will see some similarities between the two. You might say that Singing in the Rain inspired director Michel Hazanavicius, but that’s another post.

To find out where Singing in the Rain will be screened near you, click here.

Posted by Stephen Reginald at 8:55 PM