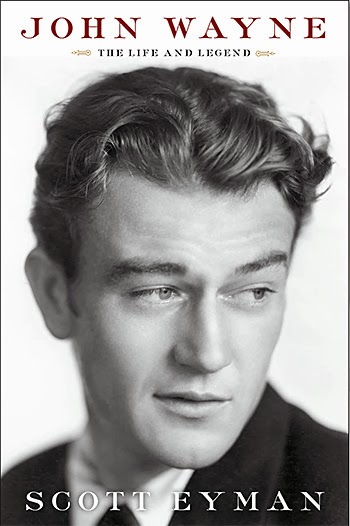 Scott Eyman’s new biography, John Wayne: The Life and Legend, follows Victoria Wilson’s recent biography of Barbara Stanwyck. Both biographies attempt to put the lives of their respective subjects in the context of their upbringing, relationships and Hollywood careers.

Marion Robert Morrison was born in 1907 in Winterset, Iowa. When Marion entered pictures, he adopted the name John Wayne, but his friends called him Duke. Wayne’s career as the heroic ideal in western, adventure, and war films sometimes made him appear one dimensional, but in real life he was much more complex. Wayne came from humble means, but was hard working, honest, and had the drive and desire to better himself. He was a good student, as well as an outstanding athlete. His football skills were impressive enough to earn him a scholarship to USC. He had a good relationship with his father, but his mother was remote. She made no attempt to hide her favoritism toward Wayne’s younger brother, Robert.

Wayne had an early shot at movie stardom in a Fox production called The Big Trail (1930), directed by Raoul Walsh. Walsh offered the lead role to Gary Cooper, but he wasn’t available. Fellow director John Ford recommended John Wayne for the part. The production was huge and it pioneered a new 70mm widescreen process called Grandeur. Wayne received a big buildup from the studio as a major new screen personality. Unfortunately, the film was not a success financially or critically. Most theaters couldn’t afford to upgrade to the new widescreen process, during the depression, with most moviegoers seeing the film in the traditional smaller screen ratio. This box office misfire relegated Wayne to making movies at poverty row studios. It would be nine years before he’d get another chance at stardom.

John Ford’s 1939 production of Stagecoach made Wayne a full-fledged movie star. His performance as the Ringo Kid was widely praised. It was also the beginning of Wayne’s successful association with mentor and friend Ford, a truly complicated relationship, interestingly detailed by Eyman.

Politically conservative, Wayne never let his politics get in the way of friendships and business (although some of his films had politically conservative points of view). Most of the people who worked with Wayne, fellow actors and technicians alike, adored and respected him. As a movie star, Wayne was very careful about the roles he took and was fairly hands-on in almost every aspect of his films. As he got older, this involvement resulted in forming his own production company, Batjac. During this period, he produced and starred in several successful films, including Island in the Sky, Hondo, and The High and The Mighty.

Wayne’s personal life consisted of three failed marriages to Latina women, whose ups and downs were chronicled in the tabloids, as well as the Hollywood press. There is a funny retelling of Duke’s divorce from his second wife Esperanza “Chata” Bauer. Chata was trying to get a big divorce settlement from Wayne, so she drove to court every day in a beat up old truck, trying to look needy. One day when the divorce proceedings didn’t go Chata’s way she cried and left the courthouse in a Cadillac that somehow replaced the dilapidated pickup truck.

Eyman’s biography is a fair assessment of one of Hollywood’s biggest and most enduring stars. For Wayne fans it’s a must, but for those interested in film history, it’s a fascinating read as well. Publication for this new biography is set for April, 2014, but can be preordered at Amazon. The biography is available in both hardback and Kindle versions.

John Wayne: The Life and Legend
By Scott Eyman
672 pages

Posted by Stephen Reginald at 3:41 PM

Email ThisBlogThis!Share to TwitterShare to FacebookShare to Pinterest
Labels: Classic Movie Man, Hondo, Island in the Sky, John Ford, John Wayne, John Wayne: The Life and Legend, Stagecoach, The High and The Mighty