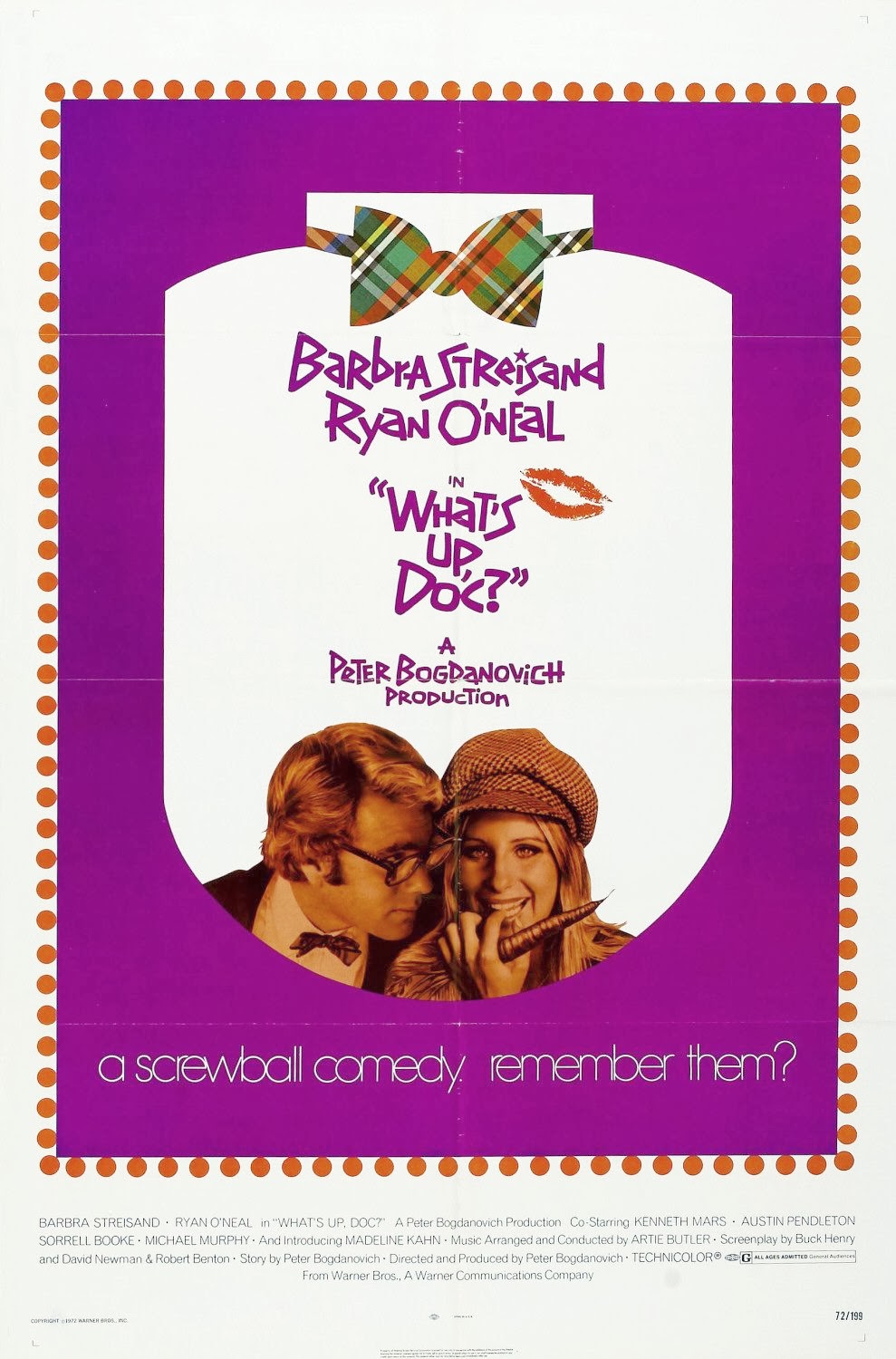 I can’t think of a better film to end our screwball comedy series than with What’s Up Doc? This modern comedy classic directed by Peter Bogdanovitch is a homage to the screwball comedies from the 1930s and 40s. It owes much of its plot and structure to Howard Hawks’s Bringing Up Baby, but it more than stands on its own merits.

Barbra Streisand and Ryan O’Neal, in their first screen pairing, play Judy Maxwell and Howard Bannister respectively. Judy is a free spirit and college dropout who seems to create trouble wherever she goes. Howard is a Ph.D. and musicologist from the Iowa Conservatory of Music, engaged to Eunice Burns (Madeline Kahn) who is a bit controlling, to put it mildly. The trouble all begins in San Francisco when four identical overnight bags get mixed up. Of course Judy and Howard’s bags are part of the mix up and their lives become entangled from there on in.

Streisand and O’Neal were at the top of their box office appeal in 1972, and Bogdanovitch exploits this. Like screwball comedies past, there are inside jokes, and allusions to other films, all with great good humor. Apart from the stars, Bogdanovitch assembled some of the best character actors available, including Kenneth Mars, Austin Pendleton, Sorrell Brooks, John Hillerman, Graham Jarvis, and Mabel Alberston to name a few. Kahn, in her movie debut, all but steals the picture. As the constantly unhinged Eunice Burns, Kahn is pitch-perfect. Annoying to both O’Neal and Streisand’s characters, she is never annoying to the audience. When I first saw the film in theaters, audiences howled with laughter every time Kahn was on the screen.

As a screwball comedy, What’s Up Doc? is so good that if released in the late 1930s or early 40s, audiences would have responded to it the way they did My Man Godfrey, The Awful Truth, and The Lady Eve.

Backstory: This was Peter Bogdanovich’s homage to the screwball comedies of the 1930s and 40s, as well as a tribute to directors Howard Hawks, Leo McCarey, and Preston Sturges.


Have some Joe and Enjoy the Show!
Before the movie, grab a cup of coffee from Overflow Coffee Bar, located within the Daystar Center. You can bring food and beverages into the auditorium; we even have small tables set up next to some of the seats.

Join the Chicago Film club, join the discussion
The Chicago Film Club is for classic movie fans. Once a month we screen a classic film and have a brief discussion afterward. For more information, including how to join (it’s free), click here.To purchase your ticket in advance, click here. The Venue 1550 is easily accessible by the CTA. Please visit Transit Chicago for more information on transportation options.