Hitchcock/Truffaut at the Music Box

In 1962, Francois Truffaut persuaded Alfred Hitchcock to sit with him for a week long interview in which the great British auteur would share with his young admirer the secrets of his cinema. 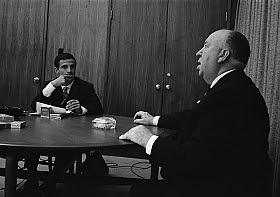 Based on the original recordings of this meeting—used to produce the seminal book “Hitchcock/Truffaut”—this film illustrates the greatest cinema lesson of all time and plunges us into the world of the creator of Psycho, The Birds and Vertigo. Hitchcock’s singular vision is elucidated and brought vividly to life by today’s leading filmmakers: Martin Scorsese, David Fincher, Arnaud Desplechin, Kiyoshi Kurosawa, Wes Anderson, James Gray, Olivier Assayas, Richard Linklater, Peter Bogdanovich, and Paul Schrader.

Posted by Stephen Reginald at 4:53 PM