Debbie Reynolds made me love the movies

I grew up going to the movies. I’m old enough to remember a time when movies didn’t have ratings. When I was young, it was completely acceptable for a group of grade-school-age kids to go the movies without any adult supervision. Often on the weekends, our whole family would go to the movies. My sister, who is 8 years older than I, also took me to the movies on a regular basis. We probably saw every Disney movie released between 1963 and 1970. But the movie I most remember seeing from my childhood is How the West Was Won, which was released in the U.S. on February 20, 1963.* 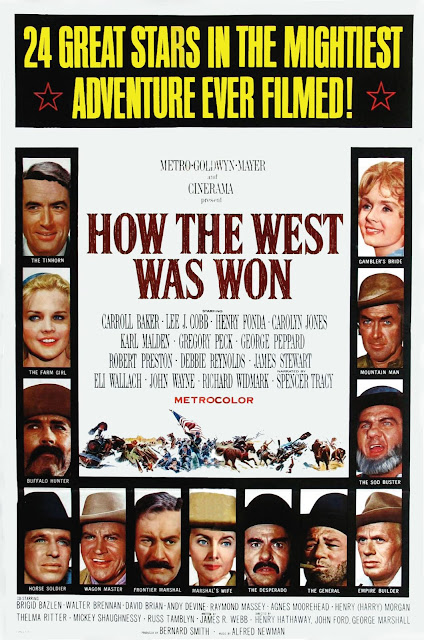 How the West Was Won was the epic story of four generations of the Prescott family as they migrated from New York to the west. The film took place between 1839 and 1889 and was shot in the curved wide-screen Cinerama process, using three cameras filming simultaneously, with each camera capturing a third of the action. When shown in theaters, three projectors were required and they had to be synchronized exactly so that the three panels would match. Although this process was technically cumbersome and had its drawbacks, for a big sprawling production like How the West Was Won, it was perfect. The screen was so big and wide that it was almost overwhelming. I was six years old when I first saw it. The film’s scope and the story of the Prescott family mesmerized me. I remember being taken by both Carroll Baker and Debbie Reynolds who played Eve and Lilith Prescott respectively. But I was especially taken by Reynolds’s character. She was the rebellious sister who was funny and cute.


During one scene, the Prescott family is taken in by river pirates headed by Jeb Hawkins played by Walter Brennan (Amos from The Real McCoys!). With some help from fur trader Linus Rawlings (James Stewart), the Prescott family is saved. But the Prescotts don’t just sit around and wait to be rescued. Oh, no. And Lillith is not afraid to fight for her family. There is one memorable scene where Hawkins’s daughter, Dora (Brigid Bazlen), tries to escape with the Prescott family’s money, but is spied by Lilith. Lilith takes the sack of money from Dora and proceeds to smack her in the head with it! What a brave girl! From that moment on I was smitten with Reynolds’s character.

After the encounter with the river pirates, Older sister Eve ends up marrying Linus and the two homestead in Ohio, where Mr. and Mrs. Prescott died in the river rapids on their journey west.


Lilith decides to continue moving west and ends up in St. Louis as a dance hall girl where she meets gambler Cleve Van Valen (Gregory Peck). When he discovers that Lilith has inherited a California gold mine, he follows her on a wagon train taking her there. The two eventually marry and settle in San Francisco.


The story then turns to the Civil War, where Linus Rawlings is killed in battle. Eve and Linus’s oldest son Zeb (George Peppard) wants to enlist and join the fight, but once he does and sees the horrors of war, he has second thoughts. But he endures and after the war he meets one of his father’s fur trapping buddies Jethro Stuart (Henry Fonda). Zeb a lieutenant in the U.S. Calvary, is in charge of keeping the peace while the Central Pacific and Union Pacific railroads are racing to join the east and the west. Jethro is in charge of supplying the railroad crew with meat, as well as being a go-between with the Indians. When railroad man Mike King (Richard Widmark) breaks a treaty with the Indians, who retaliate by sending a stampede of buffalo through his camp, killing many women and children, Zeb resigns in disgust and moves to Arizona.


We go back to Lilith who is now a widow forced to sell her home and possessions in San Francisco to pay off her debts. She travels to Arizona to meet her nephew Zeb and his wife Julie (Carolyn Jones) and their two sons Prescott (Stanley Livingston from My Three Sons) and Zeke (Bryan Russell) and their daughter, Eve. Lilith wants Zeb to manage her ranch, which is her one remaining asset. But before they can get to the ranch, Zeb, a marshall, has to do battle with the outlaw Charlie Gant (Eli Wallach). Zeb killed Gant’s brother in a gunfight and Gant has threatened Zeb and his family with revenge. An exciting fight takes place on a train with a large gold shipment. A shootout between Zeb and his men against Gant and his gang results in a fantastic train wreck. Gant and his men are all dead. Zeb and his family, along with his Aunt Lilith begin their journey to Arizona to start a new life.


How the West Was Won was the first movie that I can remember being able to follow the narrative. For the first time it hit me that movies weren’t just images on a big screen. Movies could reach a person on an emotional level. I was able to relate to the Prescott family and their struggles and I was pulling for them. Debbie Reynolds’s character, fought with bandits, survived the rapids in Ohio, a wagon train Indian attack, had some success as a showgirl in St. Louis, made and lost a fortune in California, and eventually retires with her nephew and his family on a ranch. She was in the first and closing scenes, which tied all the generations together.

Seeing the film as an adult I find it still resonates with me. Reynolds’s performance holds up and is really quite remarkable. A very young looking 30 years old when she made How the West Was Won, Reynolds effectively portrays the young teenage Lilith, developing into the older and wiser showgirl and businesswoman. She is the film’s emotional anchor, holding her own with some of the biggest movie stars of all time.

It was my connection to Reynolds’s characterization of Lilith in How the West Was Won which led me to love the movies and appreciate the power of visual storytelling. Whenever How the West Was Won is on Turner Classic Movies, it’s hard for me to resist watching it, even though I have it on DVD (two copies actually!). The story, the stars, the musical score, all hold a special place in my heart and I have Debbie Reynolds, in part, to thank for that.