Baby Face (1933) was the Pre-Code Hollywood film that helped usher in the Production Code. Very frank for its time, the plot concerns one Lily Powers (Barbara Stanwyck) and her attempts to use sex to advance her social and financial status. After her father’s death, Lily leaves her home in Erie, Pennsylvania, for New York City. She lands an entry-level job at a bank by flirting with the assistant to the personnel director. 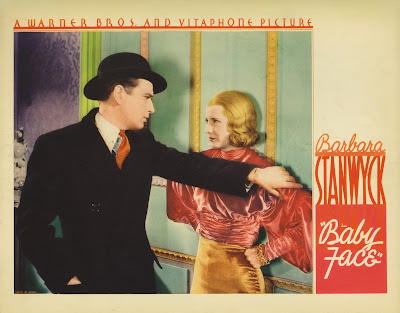 From this small job, she climbs the ladder by using the men who employ her. Along the way she has an affair with Jimmy McCoy Jr. (a very young John Wayne), but soon casts him aside when she seduces his boss. When the grandson of the company’s founder, Courtland Tenholm (George Brent) is elected president, Lily’s plans go in another direction.

This early Stanwyck film is an example of what movies were like before the studio-lead Production Code went into effect in 1934.


This film is part of the “Stanwyck on State Street” series.

Posted by Stephen Reginald at 8:25 PM