Book review: “Jimmy and Fay: A Suspense Novel” with a classic movie backdrop 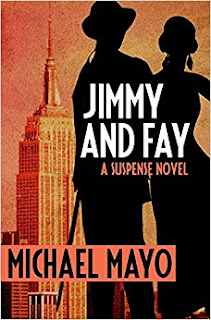 If you enjoy mystery novels and classic movies, Michael Mayo’s Jimmy and Fay may be right up your alley. Set when the 1933 version of King Kong is premiering at Radio City Music Hall, the novel concerns actress Fay Wray and blackmail. Blackmailers have some pictures of a lookalike in some compromising positions and they’re ready to send them to the press if the RKO movie studio doesn’t pay them off.

Enter Jimmy Quinn, the hero of The Jimmy Quinn Mysteries, a tough guy with a limp who operates a speakeasy in New York City. Quinn knows just about every crook and bad guy in the city so of course Wray comes to him for help. Quinn works his contacts to get to the blackmailers, but discovers an underground producer of stag films in Chinatown. Are the blackmailers and the underground filmmakers working together? And then there’s a goat—you have to read the book to understand!

Michael Mayo’s first-person narrative is smooth, easy reading. He has a good ear for authentic, film noir-style dialogue that fits in well with the plot. According the acknowledgments page, Jimmy and Fay is “fiction based on fact.” A year after she starred in King Kong, Wray was the victim of a extortion threat. The kind of threat Wray was subjected to in this novel was probably common during the days of Hollywood’s Golden Age. Fortunately for Wray, the studio was able to mitigate that real situation and successfully kept it out of the press.


If you enjoy mysteries set against a historical fiction background, Jimmy and Fay may be the book (and series) for you.

Disclosure: I received a review copy of this novel from the publisher.

Posted by Stephen Reginald at 8:28 PM