Jane Eyre (1943) is a gothic romance directed by Robert Stevenson and starring Orson Welles and Joan Fontaine. Based on the classic novel by Charlotte Bronte, the screenplay was written by John Houseman, Aldous Huxley, and Robert Stevenson. Bernard Herrmann wrote the film score. 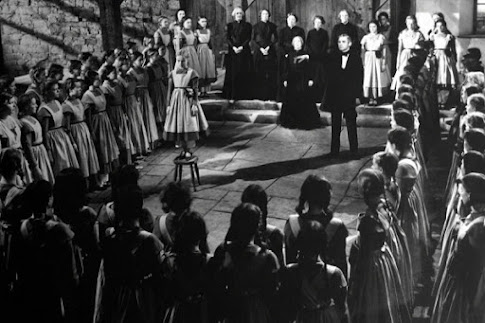 The plot concerns Jane Eyre, an orphan educated at Lowood, a charity institution for young girls run with brutal discipline by Mr. Brocklehurst. When Jane reaches adulthood, she advertises for a job as a governess. Edward Rochester hires her through his housekeeper Mrs. Fairfax, who at first, Jane believes to be the mistress of the house. Jane enjoys her job as governess to Adele, Mr. Rochester’s ward. In spite of Mr. Rochester’s sometimes-surly behavior, Jane finds herself drawn to him. As their relationship eventually grows into love, a secret from Rochester’s past threatens to doom them both.

Robert Stevenson (1905 – 1986) was an English film director, screenwriter, and actor. Producer David O. Selznick brought him to Hollywood where he loaned out his services as a director to other studios. In Hollywood, Stevenson directed Tom Brown’s School Days (1940), Back Street (1941) starring Charles Boyer and Margaret Sullavan, Joan of Paris (1942) starring Michele Morgan, and Dishonored Lady starring Hedy Lamarr (1947). Stevenson also directed many episodes of top television series including Gunsmoke, Jane Wyman Presents The Fireside Theatre, and Alfred Hitchcock Presents. Stevenson really hit his stride when he began working for the Walt Disney Studios. At Disney, he directed Johnny Tremain (1957), Old Yeller (1957), Darby O’Gill and the Little People (1959), Kidnapped (1960), The Absent-Minded Professor (1961), In Search of the Castaways (1962), The Love Bug (1968), and two of my favorites, The Misadventures of Merlin Jones (1964) and The Monkey’s Uncle (1965). None of the above Disney classics could compare, however, to the huge success of Mary Poppins (1964) which went on to win five Oscars. Stevenson directed Hayley Mills in That Darn Cat! (1965), her last movie under contract with Disney. In 1977, Variety reported that Stevenson was “the most commercially successful director in the history of films. Stevenson became an American citizen during World War II and was in the U.S. Army Signal Corps with director Frank Capra.

Orson Welles (1915- 1985) was an American actor, writer, director, and producer. He is considered one of the greatest filmmakers of all time, with Citizen Kane (1941) considered by many to be the greatest film of all time. Welles got his start on the stage. He formed the Mercury Theatre with John Houseman in 1937. Many of the actors from his repertory theatre starred in his first two films. Welles had a reputation for being difficult and undisciplined which contributed to his low output of films. In spite of all that, his reputation as a Hollywood genius remains untarnished.

Others in the cast include Margaret O’Brien as Adele, Peggy Ann Garner as the young Jane, Agnes Moorehead as Mrs. Reed, John Sutton as Dr. Rivers, Henry Daniell as Mr. Brocklehurst, Edith Barrett as Mrs. Fairfax, and Sara Allgood as Bessie. An eleven-year-old Elizabeth Taylor plays Jane’s childhood friend at Lowood. So unknown was Taylor at this time that she didn’t receive on-screen billing. Both Taylor and Margaret O’Brien were loaned from their home studio, M-G-M to Fox for their work in Jane Eyre.

To join us on Zoom for a discussion of the film on January 12, 2021, at 6:30 p.m. Central Time, click here. Once you RSVP, you will receive an invitation and link to the Zoom meeting.

Posted by Stephen Reginald at 2:45 PM