The Leopold and Loeb case is the basis for “Compulsion”

Compulsion (1959) is an American crime drama directed by Richard Fleischer and starring Orson Welles, Diane Varsi,  Dean Stockwell, and Brandford Dillman. The film is based on a novel written by Meyer Levin, which was a fictionalized account of the Leopold and Loeb murder trial.

Friends Judd Steiner, based on Nathan Leopold, (Stockwell), and Artie Strauss, based on Richard Loeb (Dillman) kill a boy in order to commit the perfect crime. The not-so-perfect crime finds both young men turning on each other as the evidence points to their guilt. Jonathan Wilk (Welles), a famous attorney, based on Clarence Darrow is hired to defend Judd and Artie and save them from the death penalty.

Richard Fleischer (1916 - 2006) was an American film director who worked in Hollywood for decades. He got his start at RKO studio directing short subjects and documentaries. He won an Academy Award as the producer of the documentary Design for Death (1947) which was co-written by Theodor Geisel (Dr. Seuss). Fleischer directed several popular films noir including Armored Car Robbery (1950) and The Narrow Margin (1952). By the mid-1950s, Fleischer was directing A pictures including 20,000 Leagues Under the Sea (1954), The Girl in the Red Velvet Swing (1955), and The Vikings (1958). During the late-1960s, he directed Fantastic Voyage (1966), Doctor Dolittle (1967), and The Boston Strangler (1968). Fleischer was the son of pioneering film animator Max Fleischer, the creator of Betty Boop and Popeye.

Diane Varsi (1938 - 1992) was an American film actress best known for her role as Allison MacKenzie in Peyton Place (1957). For her role as Allison, she was nominated for a Best Supporting Actress Academy Award. She shared the Golden Globe Award for New Star of The Year with Sandra Dee and Carolyn Jones in 1958. Varsi had lead roles in several films but became disenchanted with Hollywood and walked out on her contract with Twentieth-Century Fox.

Bradford Dillman (1930 - 2018) was an American actor and author. Dillman graduated from Yale University and was a United States Marine Corps during the Korean War. After the war, he studied at the Actors Studio. He made his Broadway debut playing Edmund Tyrone in Long Day’s Journey into Night in 1956. His stage success brought him to Hollywood where he was put under contract with Twentieth-Century Fox. After leaving Fox, Dillman starred mostly on television, appearing on popular series like Dr. Kildare, The Name of the Game, Wild Wild West, and The Mary Tyler Moore Show. Dillman was married to model and actress Suzy Parker until her death in 2003.

To join the discussion Zoom, March 9, 2021, at 6:30 p.m. Central Time, click here. Once you RSVP, you will receive an invitation with a link to join Zoom. 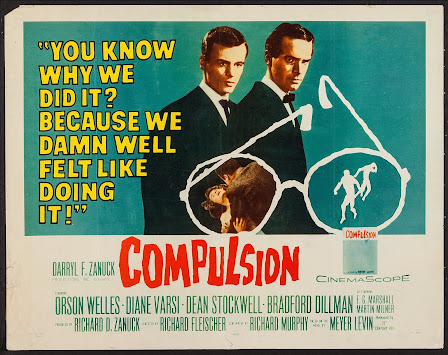 Posted by Stephen Reginald at 7:27 PM