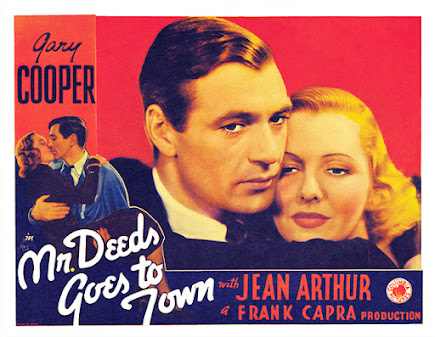 The plot concerns one Longfellow Deeds (Cooper), co-owner of a business, greeting card poet, and tuba-playing musician. Deeds lives in the peaceful town of Mandrake Falls, Vermont, during the Great Depression. Due to the accidental death of his uncle Martin Semple, Deeds inherits 20 million dollars. Semple’s shady lawyer John Cedar (Dumbrille) tries to control Deeds’s fortune by scheming to give him power of attorney.

Enter Louise “Babe” Bennett (Arthur), star reporter for a New York City newspaper. She gains Deeds’s confidence by masquerading herself as a poor worker named Mary Dawson. By doing this, Babe writes a series of popular articles on Deeds, portraying him as a simple-minded hick who just happened to inherit 20 million dollars. She gives him the nickname “Cinderella Man” and a legend is born.

Posted by Stephen Reginald at 2:06 PM