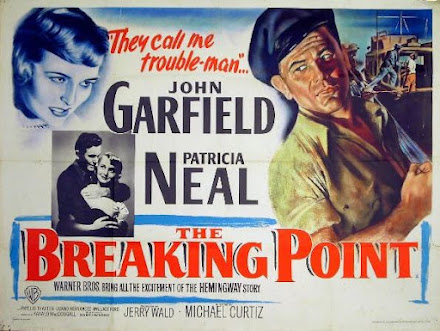 John Garfield plays Harry Morgan, a sports-fishing boat captain whose business is not going very well. In an effort to keep his business afloat (no pun intended) and to support his wife and two young daughters, he hooks up with a shady lawyer named Duncan (Wallace Ford). Duncan gets him involved with human smuggling and before he knows it, he’s involved with more criminal activity.
Harry’s life Lucy, (Phyllis Thaxter) begs him to give up the boat and start over with a new job with her father and move away from California. Harry refuses his wife’s plea and instead, risks losing his family, and the respect of his partner Wesley Park (Juano Hernandez).
Will Harry come to his senses or will his fear of failure distort his judgment and destroy his chance at happiness.

To join our discussion on September 6, 2021, at 6 p.m. Central Time, click here. Once you RSVP, you will receive an email with an invitation to the meetup and a link to the meeting on Zoom.

Posted by Stephen Reginald at 5:41 PM