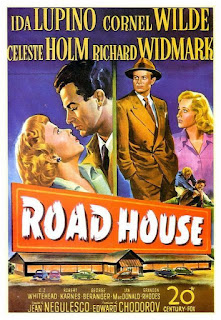 Maybe it's not exaclty a classic, but it is great fun and one of my favorite melodrama's from the late 1940s. Road House

in her first role as a "freelance" movie star. After her contract with Warner Bros. ended, Twentieth Century Fox mogul, Darryl F. Zanuck hired Lupino for the lead role of Lily Stevens.

In the film, Lily is hired by Jefty Robbins (Richard Widmark

at his looney best) to sing at his road house near the Canadian border. Little does she know that Jefty has more on his mind than hiring a new singer. Enter Pete Morgan (Cornel Wilde), Jefty's friend and road house manager. At first, Pete and Lily are at odds, but soon a romance develops between them, enraging Jefty. Jefty is so crazy with jealousy over Pete and Lily's romance that he sets Pete up and has him arrested and tried for burglary. In a perverted twist, Jefty asks the judge to remand Pete to his custody so he can break him and Lily. Lily and Pete are befriended by coworker Susie Smith (Celeste Holm in a thankless role) who tries to act as a buffer between the two lovers and Jefty.

Lupino's characterization as the hard-edged lounge singer is a hoot. She smokes, drinks, and plays the piano all at the same time, making it seem natural and easy. Not too many actresses could make this work, but Lupino does with great skill, including giving Lily a voice that sounds like whiskey and gravel. The heat generated between Lupino and Wilde is pretty hot, even by today's standards. Director Jean Negulesco keeps the action moving, building things toward the dramatic conclusion.

Road House may not be a classic in the truest sense of the word, but it's a ton of fun and not to be missed. The DVD, part of the Fox Film Noir series, is crisp and sharp with commentary by film historians Kim Morgan and Eddie Muller, who may have had a few drinks at Jefty's before they started talking. A short featurette, Killer Instincts: Richard Widmark and Ida Lupino at Twentieth Century Fox is worth watching.
Posted by Stephen Reginald at 4:54 PM