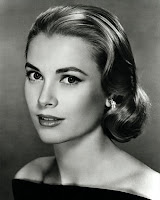 Everyone knows the name Grace Kelly (1929-1982). But do they know the person behind that name? Is she the glamorous movie star who took the mid-1950s by storm and then gave it all up to marry a prince? Or is she the shy girl, who did not quite fit in with the athletic and outgoing Kelly clan?
Quiet Grace
Grace Patricia Kelly is all of the above. The third of four children, Grace was quiet and solitary in contrast to her older sister, Peggy, older brother John, and younger sister Lizanne. How she became a movie icon is a Hollywood story if ever there was one, but it’s also about timing. If there weren’t a Grace Kelly in the mid-1950s, we would have had to invent her.
New girl in town
Kelly was part of a new crop of female movie stars, a crop that also included Audrey Hepburn

, groomed during the waning days of the old studio system. She signed a seven-year contract with MGM, but they didn’t seem to know what to do with her. Her best movie roles came by way of other studios on loan outs.

(1953), was her biggest role at this point in her career. She played opposite two undisputed superstars: Clark Gable

. But she almost didn’t get that role. Gene Tierney

(who starred with Gable in Never Let Me Go that same year) was director John Ford’s (and MGM’s) first choice. Due to her developing mental illness, Tierney had to drop out. It was then that Kelly was given the role of the unfaithful wife who falls for Gable’s character, but loses him in the end. For this role, Kelly received an Academy Award nomination as Best Supporting Actress. But even with the nomination, Kelly’s stardom wasn’t a sure thing.

The New York Times’s movie critic, Bosley Crowther gave a rather lukewarm review of Mogambo, waiting until the very last paragraph (first sentence of a two-sentence paragraph at that) to even mention Kelly. That was all about to change; the public and Crowther would soon take notice.
Kelly gets noticed

was searching for a female lead for a film he was directing at Warner Bros., Dial M for Murder

. While looking for an actress to cast, he reviewed an old screen test Kelly had done at Twentieth Century Fox and watched Mogambo. While Hitchcock thought Kelly was stiff, if not a bit wooden, he saw that she had potential. Almost immediately, the master of suspense started to mold Kelly into the prototypical cool Hitchcock blond. When Dial M for Murder was released, the reviews were good, some even thinking it better than the stage play upon which it was based. This time, Crowther mentioned Kelly in the sixth paragraph (out of seven) of his review saying, “Grace Kelly does a nice job of acting the wife's bewilderment, terror and grief.” From the likes of Crowther, that was absolutely glowing praise.

Almost on the back of filming Dial M for Murder, Hitchcock requested Kelly’s services again for Rear Window. At the time the role of Lisa Carol Fremont was offered to her, Kelly was considering the role of Edie Doyle for On the Waterfront,

the role that eventually went to Eva Marie Saint

. Kelly loved the Rear Window script and decided she'd rather portray a model from Manhattan than a middle-class girl from New Jersey. She could not have imagined how fortuitous a choice that would be.
Careful collaborations
Once again, Hitchcock took complete control of Kelly’s image and introduced her to screenwriter, John Michael Hayes. As Hayes would state in an interview before his death in 2008, Hitchcock asked him to get to know Kelly and study her speech patterns. Hayes was instructed to write dialogue that would seem natural coming out of Kelly’s mouth. Hitchcock thought (and rightly so) that if Kelly collaborated with Hayes on some of her dialogue, her characterization would avoid the stiffness of some of her earlier roles. The fact that Hayes’s wife was a former model made him the perfect person to write for Kelly.

Under Hitchcock’s direction, Head went to work on creating a wardrobe that would be true to Kelly’s character as well as showcase her incredible beauty. With Kelly, Head had a clean canvas upon which she could create a look that was stylish, chic, and deceptively simple in design.
When Rear Window opened at the Rivoli in August of 1954, 2,000 people attended the premier, a benefit for the American-Korean Foundation. It was an immediate commercial and critical success and people took notice of Grace Kelly in what would become an iconic role for the then 25-year-old actress.


Five movies in one year!

In 1954, moviegoers couldn’t avoid Grace Kelly. That year, she had no fewer than five films in release: Dial M for Murder (May), Rear Window (August), The Country Girl

, The Bridges at Toko-ri

(December). For her performance in The Country Girl, she was awarded the Best Actress Academy Award for 1955. The competition was unusually stiff that year, with Kelly besting Dorothy Dandridge (Carmen Jones

), and Judy Garland (A Star is Born

). Garland was the sentimental and the odds-on favorite, so Kelly’s win was a bit of a shock to many. Supposedly, six votes separated the two stars.
A star is born and then she's gone

As quickly as Kelly’s star rose, so did her departure from Hollywood. She would have one film released in 1955, To Catch a Thief

, again working with Hitchcock and Edith Head. In 1956, she would have two films in release, The Swan

, which would be her last. On April 19, 1956, Kelly wed Prince Rainier of Monaco. Rumors of a comeback never materialized. Grace Kelly remained Princess Grace of Monaco until her traffic death in a car accident on September 14, 1982. She was 52 years old.

Posted by Stephen Reginald at 12:16 PM