Film Club to screen Marilyn Monroe classic “Some Like It Hot” December 13, 2012 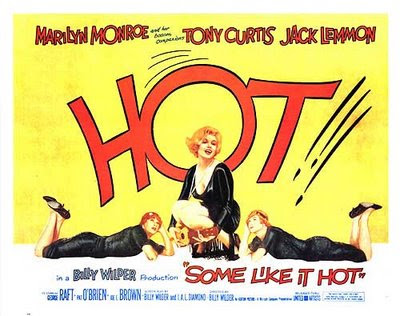 The comedy classic Some Like It Hot will be screened December 13, 2012 at 7 p.m. at The Venue 1550. The Venue 1550 is located at the Daystar Center, 1550 S. State St., Chicago. Hosted by Stephen Reginald, the current Film Club series features classic films having connections with Chicago. Reginald will introduce each film giving background information before screenings, with Q & A afterwards.


Some Like It Hot (1959)—Directed by Billy Wilder and starring Marilyn Monroe, Tony Curtis, and Jack Lemmon, this classic was voted funniest film of all time by the American Film Institute. Curtis and Lemmon play Chicago musicians who accidentally witness the Saint Valentine’s Day massacre of 1929. The men disguise themselves as women and travel south with Sweet Sue’s all-girl band in an attempt to avoid “Spats” Colombo and his gang who are determined to kill them. Monroe—the band’s vocalist—and the “girls” become bosom buddies along the way, which leads to some hilarious situations and unusual conclusions.

The plot thickens
To escape “Spats” Columbo and his gang, Joe and Jerry (Curtis and Lemmon) disguise themselves as women and join an all-girl band traveling by train to Florida. Masquerading as Josephine and Daphne, Curtis and Lemmon somehow fool bandleader Sweet Sue and band-manager Beinstock, who are desperate to round out their jazz band.


Underneath the sheltering palms
On the train ride to Florida, Josephine and Daphne meet Sugar Kane Kowalczyk (Marilyn Monroe). Things get complicated when Joe-Josephine starts to fall in love with Sugar. With amazing energy and dexterity, Joe-Josephine manages to assume the identity of Junior, heir to the Shell Oil fortune, in order to woo Sugar and then switches back to play with Sweet Sue and Her Society Syncopaters, to hide out from the Columbo gang. All this switching back and forth makes Daphne’s (Lemmon’s ) head spin. But Daphne has her own problems. The rich, much-married Osgood Fielding III finds Daphne irresistible and proposes. What’s a nice “girl” like Daphne to do?

With more twists and turns than a roller coaster, Some Like It Hot boasts memorable performance from the three leads and was voted the number one comedy film of all time by the American Film Institute (AFI).

Admission is $7 per person. Tickets purchased at the door.

Reginald is a freelance writer/editor and popular instructor at Facets Film School in Chicago. He was also the original host of Meet Me at the Movies.