The 2013-14 Film Club is back at The Venue 1550 at the Daystar Center, 1550 S. State St., Chicago. Hosted by Stephen Reginald, the film club will feature seven classic screwball comedies, including The Awful Truth and The Lady Eve. Movies will be screened at 6:30 p.m. on the second Tuesdays* of the month, starting September 10, 2013. Reginald will introduce each film giving background information before screenings, with discussion afterward. Reginald is a freelance writer/editor and popular instructor at Facets Film School in Chicago. He was also the original host of Meet Me at the Movies.

Production Code births the Screwball Comedy
With the enforcement of the Motion Picture Production Code in 1934, movie studios were restricted in their depiction of certain “unacceptable” activities on screen. Prior to the code, the studios produced a string of provocative films that, for the time, were quite sexually explicit.

Once the self-censorship began, the major studios had to come up with clever ways to entertain audiences without going outside the boundaries of the code. Out of these new constraints came the screwball comedy. The use of snappy dialogue filled with double entendres substituted for more straightforward “sex talk,” with the female lead becoming the dominant sex talker, if you will. Professor and film historian, Maria DiBattista calls these women “fast-talking dames.”

This fast-talking by the female protagonist is used not only to get laughs, which it most certainly does, but also to transform the male into a new man of her own creation. This reverse Pygmalion scenario, as noted by DiBattista and others, is at the heart of the screwball comedy and places women in the primary role. This genre produced many familiar female screen icons, including Irene Dunne, Katherine Hepburn, Carole Lombard, and Barbara Stanwyck. This series will examine the screwball comedy, in the context of the female protagonist and her very important place in the canon of American cinema. 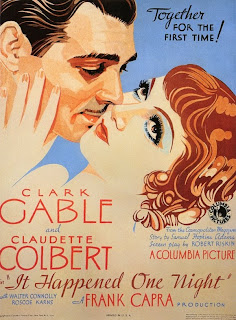 September 10 It Happened One Night (1934) When her father threatens to annul her marriage to oily fortune hunter King Westley, heiress Ellie Andrews hops on a cross-country bus to New York. On the trip to meet her new husband, she is befriended by a gruff newspaper reporter named Peter Warne. He agrees to help her on her journey in exchange for exclusive rights to her story. When Ellie and Peter find themselves falling in love, things get complicated, but don’t worry because there are plenty of laughs along the way. Director Frank Capra won the first of his three Oscars for his direction. Stars Clark Gable and Claudette Colbert won Oscars for Best Actor and Actress respectively. It also won awards for Best Picture and Best Writing, making it the first film to sweep all the major Oscar categories, a record it would hold for decades.

October 8 My Man Godfrey (1936) Considered the definitive screwball comedy by many, the plot centers on the actions of the wealthy and eccentric Bullock family. When one of the Bullock daughters (Carole Lombard) hires a “forgotten man” to be their new butler, things get interesting. The film features brilliant performances from Lombard and William Powell as Godfrey. It also features an excellent supporting cast that includes Alice Brady, Eugene Pallette, Gail Patrick, Mischa Auer, and Jean Dixon. My Man Godfrey was the first film to receive Academy Award nominations in all four acting categories. Also nominated for Academy Awards were director Gregory La Cava (Stage Door, Fifth Avenue Girl) and screenwriters Eric Hatch and Morrie Ryskind. 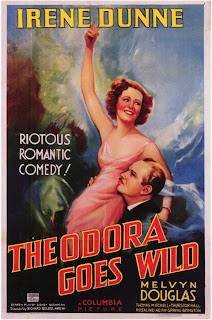 November 19 Theodora Goes Wild* (1936) Irene Dunne plays Theodora Lynn, a small-town girl who has written a racy best-selling novel under the pen name Caroline Adams. Raised by her two maiden aunts, of Lynnfield, Connecticut, Theodora tries to keep Adams’s true identity a secret. On a trip to New York to meet with her publisher, she meets an artist named Michael Grant (Melvyn Douglas) who threatens to expose her real identity. When Theodora discovers that Michael has a few secrets of his own, she turns the tables on him and goes “wild.” Released a few months after My Man Godfrey, Theodora Goes Wild was a huge box office hit. It also revealed that Dunne had a unique gift for comedy. So good was Dunne that she received her second Academy Award nomination for Best Actress—competing against fellow Hoosier, Carole Lombard who was nominated in the same category for My Man Godfrey.

*Theodora Goes Wild will be screened on the third Tuesday in November.

December 10 Christmas in Connecticut* (1945) A big hit when released, this holiday classic is sometimes overlooked in the lists of great Christmas movies. Made when Barbara Stanwyck was at her peak, the story is clever and genuinely funny. Stanwyck is Elizabeth Lane, a writer for Smart Housekeeping magazine, who delights her readers with recipes and homemaking hints. Her character is sort of a 1940s version of Martha Stewart, except, unlike Martha, she has no domestic skills whatsoever. When compelled by her magazine publisher to entertain a war hero, Stanwyck goes into high gear to present herself as the perfect domestic goddess the reading public and her publisher think she is. This holiday charmer fits right in with our screwball comedy series.

*Christmas in Connecticut will be screened on Saturday December 7 at 6:30 p.m. 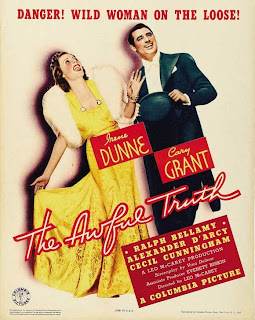 January 14 The Awful Truth (1937) The first screen pairing of Irene Dunne and Cary Grant is an (Love Affair, Going My Way,) won the Academy Award for his direction.
absolute gem. This Academy Award winning comedy has everything: great acting, dialogue, and a wonderful cast of supporting players. Lucy (Dunne) and Jerry (Grant) Warriner are facing divorce, but do they really want to break up? Lucy finds herself involved with a rich oil tycoon and Jerry starts courting a young woman from a well-heeled aristocratic family. Both try to foil the others’ new romances, while refusing to face the awful truth that they’re still in love with each other. Nominated for five Academy Awards, including a third Best Actress nod for Dunne. Director Leo McCarey

February 11 Bringing Up Baby (1938) Katharine Hepburn is Susan Vance, a rich heiress who becomes infatuated with a mild-mannered paleontologist named David Huxley (Cary Grant). What follows is a roller coaster ride of madcap adventures all initiated by Susan with the weak-willed David along for the ride as her not-so-willing accomplice. And then there’s a dog named George and that leopard named Baby! Director Howard Hawks’s pacing is frenetic. The action and dialogue is nonstop. Don’t be surprised if you’re exhausted after watching this film…but you’ll be smiling, we guarantee it. 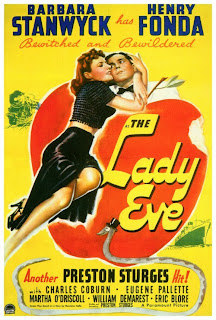 March 11 The Lady Eve (1941) Father and daughter con artists (Charles Coburn and Barbara Stanwyck) travel on transatlantic cruise ships swindling rich passengers in card games. When the two spot big fish Charles Poncefort Pike (Henry Fonda), heir to Pike Ale—“The ale that won for Yale”—they decide to take him for all he’s worth. But when the daughter falls in love with their mark, things get complicated and hilarious. Preston Sturges directed his first big-budget hit with amazing results. A critical and financial success, The New York Times declared The Lady Eve the best picture of 1941, above Citizen Kane! Once you see this film you’ll understand why they came to that amazing conclusion.

If you love classic cinema, you should join the Chicago Film Club. It’s free to join. Come share your love of the movies; it’s fun!

Posted by Stephen Reginald at 6:43 PM