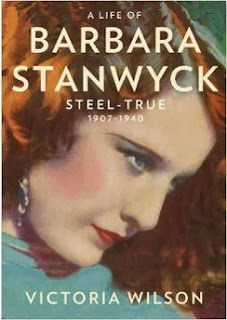 A Life of Barbara Stanwyck: Steel-True 1907-1940 by Victoria Wilson comes out this month. I’m looking forward to reading and reviewing it, but thought I’d post the description of the first part of the two-part biography from Amazon for your review. At the end of this post is a video of Wilson describing how this project (a work that took her 15 years!) came together and what sets it apart from other Stanwyck biographies. Anyone who reads this blog knows that I'm a huge Stanwyck fan. You can pre-order Wilson’s biography by clicking here.

Frank Capra called her “The greatest emotional actress the screen has yet known.” She was one of its most natural, timeless, and underrated stars. Now, Victoria Wilson gives us the first full-scale life of Barbara Stanwyck, whose astonishing career in movies (eighty-eight in all) spanned four decades beginning with the coming of sound, and lasted in television from its infancy in the 1950s through the 1980s—a book that delves deeply into her rich, complex life and explores her extraordinary range of motion pictures, many of them iconic. Here is her work, her world, her Hollywood.

We see the quintessential Brooklyn girl whose family was in fact of old New England stock . . . her years in New York as a dancer and Broadway star . . . her fraught mar­riage to Frank Fay, Broadway genius, who influenced a generation of actors and comedians (among them, Jack Benny and Stanwyck herself ) . . . the adoption of a son, embattled from the outset; her partnership with the “unfunny” Marx brother, Zeppo, crucial in shaping the direction of her work, and who, together with his wife, formed a trio that created one of the finest horse-breeding farms in the west; her fairy-tale romance and marriage to the younger Robert Taylor, America’s most sought-after— and beautiful—male star.

Here is the shaping of her career with many of Hol­lywood’s most important directors: among them, Frank Capra, “Wild Bill” William Wellman (“When you get beauty and brains together,” he said, “there’s no stopping the lucky girl who possesses them. The best example I can think of is Barbara”), King Vidor, Cecil B. De Mille, and Preston Sturges, all set against the times—the Depression, the New Deal, the rise of the unions, the advent of World War II—and a fast-changing, coming-of-age motion picture industry.

And here is Stanwyck’s evolution as an actress in the pictures she made from 1929 through the summer of 1940, where Volume One ends—from her first starring movie, The Locked Door (“An all-time low,” she said. “By then I was certain that Hollywood and I had nothing in common”); and Ladies of Leisure, the first of her six-picture collaboration with Frank Capra (“He sensed things that you were trying to keep hidden from people. He knew. He just knew”), to the scorching Baby Face, and the height of her screen perfection, beginning with Stella Dallas (“I was scared to death all the time we were making the pic­ture”), from Clifford Odets’s Golden Boy and the epic Union Pacific to the first of her collaborations with Preston Sturges, who wrote Remember the Night, in which she starred.

And at the heart of the book, Stanwyck herself—her strengths, her fears, her frailties, her losses and desires; how she made use of the darkness in her soul in her work and kept it at bay in her private life, and finally, her transformation from shunned outsider to one of Holly­wood’s—and America’s—most revered screen actresses.

Writing with the full cooperation of Stanwyck’s family and friends, and drawing on more than two hundred interviews with actors, directors, cameramen, screen­writers, costume designers, et al., as well as making use of letters, journals, and private papers, Victoria Wilson has brought this complex artist brilliantly alive. Her book is a revelation of the actor’s life and work.

For you chance to win a copy of the new Victoria Wilson biography click here.

Posted by Stephen Reginald at 5:53 PM