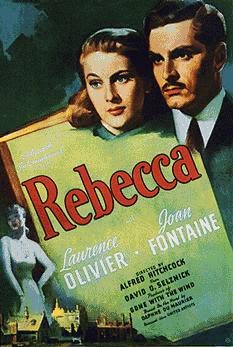 Hitchcock comes to America
By the late 1930s, Alfred Hitchcock had established himself as a major film director in his native England. The 39 Steps and The Lady Vanishes, Hollywood came calling. Independent producer, David O. Selznick put Hitchcock under exclusive contract in 1939 and the director moved to Los Angeles with his family. Hitchcock cemented his place in movie history with his first American feature, Rebecca.
After the successes of the

The search for the second Mrs. De Winter
Rebecca was released in 1940, but was in production during 1939, the same year Selznick’s epic Gone With The Wind was released. Many actresses vied for the female lead. However the desire to find a “new star” didn’t turn into the crazy spectacle like the search for Scarlet O’Hara. Many established actresses auditioned for the role, including Margaret Sullivan, Loretta Young, and Scarlet herself, Vivian Leigh. A 16-year-old Anne Baxter tested for the lead, and tested well.

A David O. Selznick production
Although Hitchcock was the director, Selznick was in control of the production and the casting. Originally, he wanted Olivia De Havilland for the second Mrs. DeWinter. Unfortunately, she was contracted to star in another film, plus, when she found out her younger sister Joan Fontaine was under consideration for the role, she was reluctant to pursue it seriously.

The lead roles are set
For the role of Maxim DeWinter, Selznick originally wanted Ronald Coleman, who turned it down. Second choice was William Powell, but he wanted too much money, $200,000 to be exact. Lawrence Olivier, hot off of his success in Wuthering Heights, agreed to play Maxim for $100,000. He had hoped to have Leigh, his lover in real life, as his costar, but Selznick never thought Leigh was right for the part. However, Selznick agreed to test her. It’s clear from those tests (which still exist) that Selznick’s instincts were correct. Both Hitchcock and Selznick were happy with casting Olivier, but they still needed to cast the second Mrs. DeWinter. After reviewing all the screen tests it came down to Fontaine and Baxter, with Fontaine finally snagging the role (At 16, Baxter was considered too young). The pivotal role of the menacing Mrs. Danvers went to Judith Anderson. George Saunders, Gladys Cooper, Nigel Bruce, Florence Bates, and Reginald Denny rounded out the supporting cast.

Hitchcock at the helm
Although Rebecca was directed by Hitchcock, Selznick’s influence is everywhere. The production is posh Rear Window). Even with Selznick’s micro-management, Hitchcock’s hand is clearly seen. The performances he elicits from Fontaine, in her first major role, and the way he captures Olivier’s dark side as Maxim are clearly the result of Hitchcock’s masterful direction. Many of the supporting cast, including Nigel Bruce, George Saunders, and Leo G. Carroll would appear in future Hitchcock films to great effectiveness.
and the crew used is all Selznick, including musician Franz Waxman (when Hitchcock had more control of his films, he would use Waxman to score

Award-winning success
Alfred Hitchcock was brought to America with all the great fanfare a showman like David O. Selznick could muster. The pressure was on both Selznick, to reproduce the success of the colossal Gone With The Wind and Hitchcock, to live up to the publicity stoked by Selznick. Rebecca proved the hype wasn’t misplaced. The film was an enormous success both critically and financially. It would go on to receive 11 Academy Award nominations, winning for cinematography, black and white, and Best Picture of the Year. Hitchcock was nominated for Best Director, but lost out to John Ford for The Grapes of Wrath.

Have some Joe and Enjoy the Show!
Before the movie, grab a cup of coffee from Overflow Coffee Bar, located within the Daystar Center. You can bring food and beverages into the auditorium; we even have small tables set up next to some of the seats.
Join the Chicago Film club, join the discussion
The Chicago Film Club is for classic movie fans. Once a month we screen a classic film and have a brief discussion afterward. For more information, including how to join (it’s free), click here. To purchase your ticket in advance, click here. The Venue 1550 is easily accessible by the CTA. Please visit Transit Chicago for more information on transportation options.
Posted by Stephen Reginald at 7:43 PM