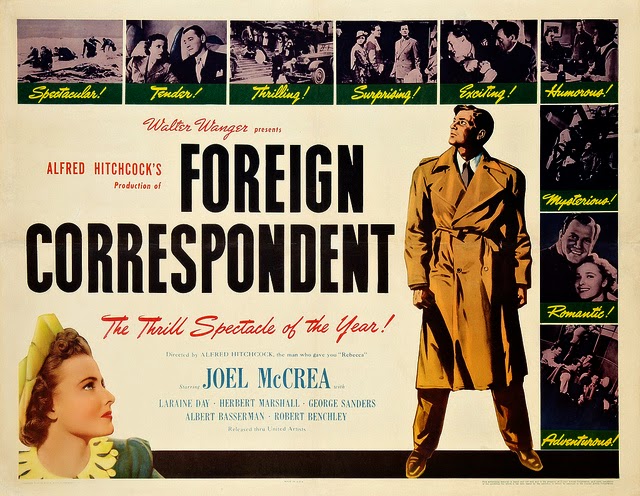 Foreign Correspondent was Alfred Hitchcock’s second American film. On loan-out to producer Walter Wanger, Hitchcock enjoyed a level of freedom that he hadn’t experienced on the set of Rebecca with David O. Selznick. Although the director didn’t get the stars he wanted, he had almost unlimited resources to create a first-class suspense classic.

Personal History
Wanger owned a property called Personal History, the memoir of a journalist named Vincent Sheean. He had owned the rights to the memoir since 1935, but was unable to turn it into a workable property. When Wanger learned that Hitchcock was available on loan-out from Selznick, he jumped at the chance to hire him. Hitchcock and his team worked over the memoir, in effect rewriting it so that it would appeal to contemporary audiences.

Starstruck
The producer was hoping that along with Hitchcock he could borrow Joan Fontaine and Brian Aherne, who were recently married as his stars. Hitchcock wanted Gary Cooper and Barbara Stanwyck. Cooper turned him down, saying he didn’t want to star in a thriller and Stanwyck was unavailable. In the end, the director had to settle on Joel McCrea and Laraine Day. Although not as big a star as Cooper, McCrea was a star in his own right. Day was a contract player at MGM who starred in the popular Dr. Kildare series with Lew Ayers. In spite of the director’s disappointment with the casting, he got terrific performances out of his leads. McCrea and Day had genuine chemistry that is both charming and believable.

Europe on the brink
The plot revolves around Johnny Jones, (McCrea) christened “Huntley Haverstock” by his newspaper’s editor (Harry Davenport) as a newly minted American foreign correspondent. On assignment in Europe, he is tasked to find out if the continent is on the brink of a World War. In Holland, Haverstock meets Carol Fisher (Day), daughter of Stephen Fisher, (Herbert Marshall) head of the Universal Peace Party. When a Dutch diplomat named Van Meer, (Albert Basserman) is assassinated, the plot really takes off. Who killed Van Meer and why? And is the head of the Universal Peace Party really working for peace in Europe?

Foreign Correspondent set the template for future Hitchcock films, including Saboteur and North By Northwest. With its amazing set pieces and complicated action sequences, it is a master class in film making. We’ll discuss the film, it’s reception and influence. Join us!

Posted by Stephen Reginald at 12:02 PM