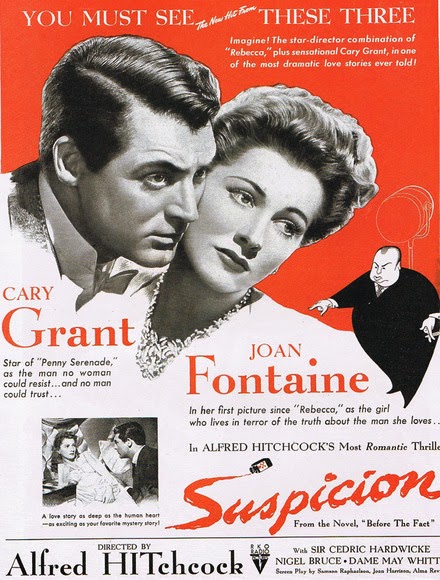 Suspicion (1941) was Alfred Hitchcock’s fourth American film. It’s legendary for several reasons. It’s the first time the director worked with Cary Grant—they would go on to work together on four films—and the second time he worked with actress Joan Fontaine (Rebecca).

The plot
Fontaine plays Lina McLaidlaw, a shy young woman who meets playboy Johnnie Aysgarth (Grant) on a train. Lina is intrigued by Johnnie and finds herself falling in love  with him, much to her parents chagrin. Lina and Johnnie eventually get married and set up housekeeping in a beautiful home purchased with borrowed money. Lina discovers, after her honeymoon, that her husband is flat broke. When Johnnie asks Lina about her inheritance from her father’s estate, Lina begins to suspect that her husband may be planning to kill her. Did Johnnie marry Lina for her money?

And the Oscar goes to
As already mentioned, this was Grant’s first collaboration with Hitchcock. Hitchcock, like no other director, managed to bring out the darker side of Grant, giving the actor a dimension not seen before. Fontaine who had her breakout performance in Rebecca, Hitchcock’s first American film, once again plays a quiet and reserved young woman forced to face some unpleasant situations. For her efforts, Fontaine was rewarded with an Academy Award for the Best Actress of 1942. She is the only actor to win an Oscar in a Hitchcock film.

Great characters
Suspicion is populated with some of the best character actors in the business: Cedric Hardwicke, Nigel Bruce, Dame May Whitty, and Leo G. Carroll.

After the success of Suspicion, Hitchcock’s name began to appear above the title of each of his films, starting with Saboteur (1942).


Have some Joe and Enjoy the Show!
Before the movie, grab a cup of coffee from Overflow Coffee Bar, located within the Daystar Center. You can bring food and beverages into the auditorium; we even have small tables set up next to some of the seats.

Join the Chicago Film club, join the discussion
The Chicago Film Club is for classic movie fans. Once a month we screen a classic film and have a brief discussion afterward. For more information, including how to join (it’s free), click here. To purchase your ticket in advance, click here. The Venue 1550 is easily accessible by the CTA. Please visit Transit Chicago for more information on transportation options.
Posted by Stephen Reginald at 8:53 PM