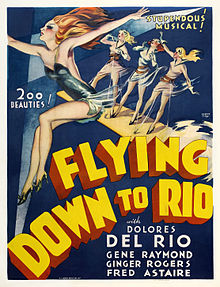 Etta Moten Barnett was an American actress and singer. She performed on stage in a revival of Gershwin’s Porgy and Bess, which became a signature role. On film she appeared in Pre-Code classics Ladies They Talk About (1933) starring Barbara Stanwyck and Gold Diggers of 1933 where she sang the classic “My Forgotten Man” with the film’s star Joan Blondell. In addition to appearing in films, her singing voice was dubbed for African American actress Theresa Harris in the film Professional Sweetheart starring Ginger Rogers (1933).

Flying Down to Rio features Ginger Rogers and Fred Astaire in their first film together, although Dolores del Rio and Gene Raymond are top-billed. Moten Barnett sings “The Carioca” while Rogers and Astaire performs the dance of the same name.

Besides her connection to Second Presbyterian Church, Moten Barnett was active in the National Council of Negro Women, the Chicago Lyric Opera, Field and DuSable Museums, and the South Side Community Center.

The screening of this film is A Black History Month Event presented in celebration of the 175th Anniversary of Second Presbyterian Church. Free popcorn and soft drinks will be served at the movie screening.
Posted by Stephen Reginald at 6:02 PM