Screening of “The Hard Way” at the Daystar Center January 17


Helen Chernen (Ida Lupino) wants out of Green Hill, the small, grimy industrial town where she grew up. When her younger sister Katie (Joan Leslie) catches the eye of a traveling vaudevillian Albert Runkel (Jack Carson), one part of the duo of Runkel and Collins (Dennis Morgan), Helen encourages Katie to elope with Albert. When Katie leaves Green Hill to go on the road with her new husband and his partner, Helen goes along with them. Helen carefully manages to incorporate Katie into the act, much to the dismay of his partner, Paul Collins. Eventually, Katie gets noticed by a Broadway producer and is cast in a featured role that puts her on the path to stardom. As Katie’s career blossoms, her marriage to Albert deteriorates. Helen’s drive to make Katie a major Broadway star takes its toll. When Katie is cast in a new dramatic play by a famous playwright, Helen thinks that she and her sister have finally made it. But have they really?

This film is part of the Classic Movie Man’s favorites series.

Backstory: The Hard Way is reportedly the veiled story of screen legend Ginger Rogers and her mother Lela. In order to avoid a lawsuit, the studio changed the relationship from mother and daughter to sisters. 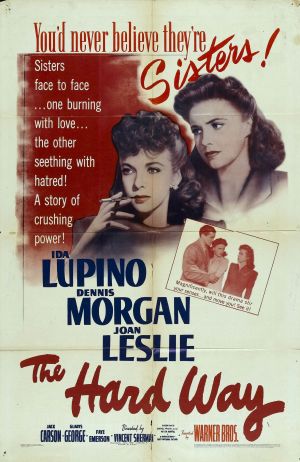 Posted by Stephen Reginald at 10:00 AM