Raiders of the Lost Ark is the first (and best) movie in the Indiana Jones franchise. The film takes place in 1936, five years before the United States entered World War II. Raiders stars Harrison Ford as professor and archaeologist Indiana Jones and Karen Allen as Marion Ravenwood, daughter of his mentor, Abner Ravenwood. Jones, at the request of the United States Army, is on the hunt for the ancient Ark of the Covenant as described in the Book of Exodus. The Bible describes the Ark as a gold-covered wooden chest that contained the stone tablets of the Ten Commandments. When the Israelites carried the Ark into battle, they were victorious. The Nazis are searching for the Ark because they believe whoever possesses it will be invincible. Jones races against time and Dr. Rene Belloq, a competing archaeologist who is working with the Nazis, to get to the Ark first. 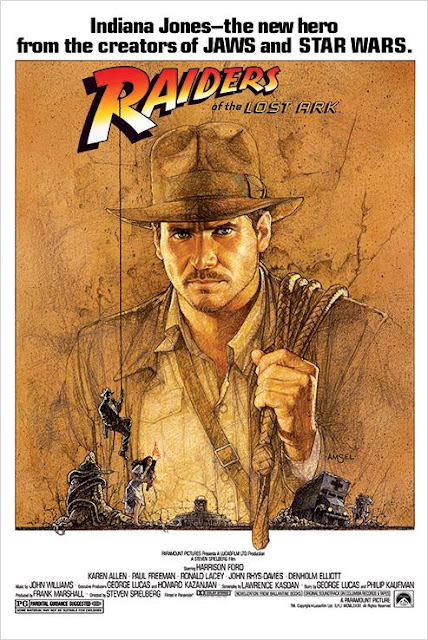 Lawrence Kasdan (Fatal Attraction) wrote the screenplay, from a story by George Lucas and Philip Kaufman. Steven Spielberg directed the action-packed adventure that was nominated for nine Academy Awards, including Best Picture. The memorable score, featuring “The Raiders March” was written by John Williams and performed by the London Symphony Orchestra.

Backstory: Tom Selleck was originally cast as Indiana Jones, but had to drop out due to his commitment to the television series Magnum P.I. Debra Winger was offered the role of Marion Ravenwood, but she turned it down. Actress Sean Young auditioned for the part, but Spielberg was set on Karen Allen after seeing her in National Lampoon’s Animal House (1978). Alfred Molina, who played director Robert Aldrich in Feud: Bette and Joan, made his film debut as Satipo in Raiders.