Boomerang! (1947) is based on a true crime. A minister is murdered in a small town in Connecticut and John Waldron (Arthur Kennedy), a young drifter, is arrested and charged with the crime. 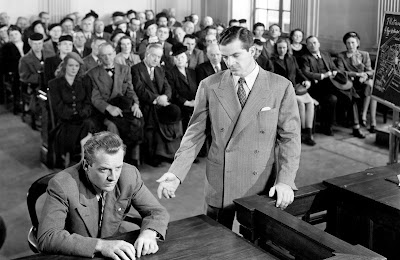 The prosecuting attorney Henry Harvey (Dana Andrews) is under pressure from local politicians to convict Waldron. The evidence points toward Waldrons’ guilt, but Harvey has his doubts. Directed in a semidocumentary-style by Elia Kazan, the movie features an impressive supporting cast that includes Jane Wyatt, Lee J. Cobb, Karl Malden, and Sam Levine.

Twice a month we screen classic films and have a brief discussion afterward. For more information, including how to join (it’s free), click here. The Venue 1550 is easily accessible by the CTA. Please visit Transit Chicago for more information on transportation options.

Stephen Reginald is a freelance writer and editor. He has worked at various positions within the publishing industry for over 25 years. Most recently he was executive editor for McGraw-Hill’s The Learning Group Division. A long-time amateur student of film, Reginald hosts “Chicago Film Club,” a monthly movie event held in the South Loop, for the past two years. Reginald has also taught several adult education film classes at Facets Film School, Chicago.
Posted by Stephen Reginald at 1:45 PM