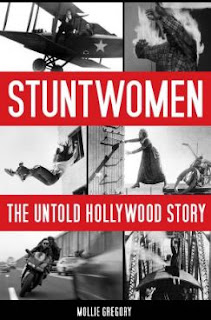 Stuntwomen: The Untold Hollywood Story sheds light on the female pioneers in the field and the struggles they faced to have their talents recognized and appreciated.

Stuntwomen have been around as long as the movies. Silent film stars Pearl White and Helen Gibson were actresses who did their own stunts. These early silent movie serials were extremely popular with the public and White and Gibson had large fan followings. However, once the movies proved to be a thriving business where there was real money to be made, many women and stuntwomen working in Hollywood found themselves unemployed.

Once the Hollywood factory was in high gear, men doubled for women. Men would don wigs and dresses, essentially freezing out any chance for women to double for women. The few women who were working gags (the name given to stunts) were underemployed and underpaid compared to their male counterparts working the same gags. The stunt community was a small one (it still is) and if you weren’t a part of “the group,” you just didn’t get called for jobs.

Author Mollie Gregory does a good job explaining the ins-and-outs of the stunt business and the problems women and men faced and continue to face today. Doing stunt work in movies has always been dangerous. Many performers have been permanently injured and some have died performing gags. The way Gregory describes it, some movie directors and producers considered stuntmen and stuntwomen as expendable. Gags that had been carefully planned out were often changed at the time of filming, putting the performer in peril. The dilemma: refuse to do the gag and risk ever getting another gig. This was something women faced when trying to break into the all-boys club. If a woman made a mistake or refused a gag they were accused of not being up to the task. Men would say things like, well, we’ll just get a guy in a wig to do it.

The book also explores the difficulties minorities faced trying to break into the business. It was common for white stuntmen to do stunts in blackface when doubling African Americans. Today life for stuntwomen and stuntmen is still challenging and dangerous. I honestly couldn’t imagine myself working as a stunt performer. Everyday is dangerous and possibly life threatening, no matter how careful the planning.

The history of stuntwomen in the movies is also a history of the movie business itself. The book explores the origins of the profession and how women competed with men to get the recognition and compensation they deserved. For anyone interested in behind-the-scenes Hollywood stories, Stuntwomen: The Untold Hollywood Story would be a worthy read.

Trailer for documentary based on the book
Posted by Stephen Reginald at 11:41 AM