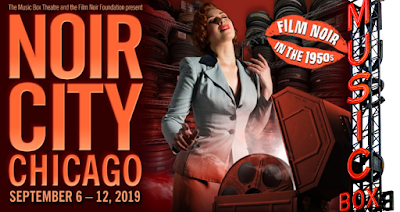 Noir City: Chicago is back at the Music Box Theatre. This year’s theme is Film Noir in the 1950s. Once again the film festival will be presented by Eddie Muller, host of TCM’s Noir Alley and the Film Noir Foundation’s Alan K. Rode, author of Michael Curtiz: A Life in Film.

The event is co-presented by the Film Noir Foundation and sponsored by TCM’s Noir Alley. Festival passes are available at $85 and $75 for Music Box Theatre members. Tickets are available for individual movies as well as packages for double features.

Some of the films to be screened include In a Lonely Place, The File on Thelma Jordan, Pickup on South Street, Sudden Fear, and Pushover. For a complete list of films screened and more information on the festival, including ticket prices, click here.

Must sees for me:

Not sure I’ll get to all of them, but those are my picks! What films are you most excited about seeing on the big screen?

Posted by Stephen Reginald at 6:01 PM